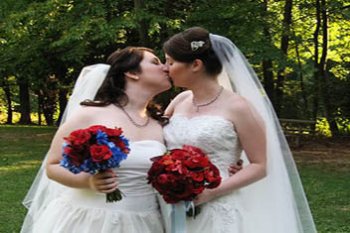 The Government has launched its three-month long consultation on the legalisation of same sex civil marriages in England and Wales (Scotland consulted separately).

The Home Office confirmed the consultation will look at how to remove the barrier to same-sex marriage to bring about equal non-religious marriage. Under the proposals, civil partnerships could be converted to marriages if couples wish.

The document confirms that civil partnership legislation will not be extended to opposite-sex couples, but welcomes views on the subject.

The consultation document says the government proposes to:

• enable same-sex couples to get married through civil ceremonies.

• allow transsexual people to change their legal gender without having to legally end their existing marriage or civil partnership.

• make no changes to how religious marriages are solemnised.

Gay couples would be able to have a marriage ceremony in civil premises or have a civil partnership on secular or religious premises if they prefer.

The consultation document first asks: "Do you agree or disagree with enabling all couples, regardless of their gender to have a civil marriage ceremony?" and allows the reader to explain this in 200 words. It was suggested by a Catholic newspaper that this question might signal a change in the Government's approach to the consultation, but the question is believed to be necessary to frame responses to the 15 further questions on the proposals that follow.

The Government's position seems to be robust, with the Prime Minister and Home Secretary giving their support – and equality should not be a numbers game. Nevertheless, given the ability of churches to orchestrate support through their congregations, something most opponents will be unable to match, we have suggested that the Government commission a poll to show the extent of public support.

Reacting to the consultation, human rights campaigner Peter Tatchell, who is also spokesman for the Equal Love campaign, said: "While we welcome the commitment to legalise same-sex civil marriages, we are unhappy that the government intends to maintain the ban on heterosexual civil partnerships and the ban on religious same-sex marriages, even if faith organisations wish to conduct them. This is not equality. It perpetuates discrimination".

"Both civil marriages and civil partnerships should be opened up to all couples, without discrimination based on sexual orientation.

"The government has announced that it will maintain the ban on religious same-sex marriages, even if faith organisations wish to conduct them. The Quakers, Unitarians and Liberal Judaism want to perform same-sex marriages. The current law says they can't.

"The government plans to maintain this prohibition. This is not only homophobic but also an attack on religious freedom. While no religious body should be forced to conduct same-sex marriages, those that want to conduct them should be free to do so.

Terry Sanderson, President of the National Secular Society, said: "The Government has gone over the top in the consultation to try to deflect religious objections to this proposal. The consultation is overwhelmingly about reassuring religious bodies that they will be protected from legal challenges from gay couples who may want a religious marriage.

"We are happy for religious groups to be given the option of not participating and keeping a definition of religious marriage that they regard as reflective of their religion's teachings.

"But over the next few weeks we are going to see an increase in the scale and unpleasantness of religious agitation against this. Despite the fact that religious marriage is unaffected and religious bodies are to be legally protected from any challenge for not offering same sex marriage, they will still insist that they have a veto on any change in civil marriage and only they can define what it means. This oversteps their position; it is parliament alone, not the churches, that establishes law."

Mr Sanderson said the recent vituperative attacks by the Catholic Church and the objections from the Church of England betrayed a sense of panic among churchmen that their traditional stranglehold over marriage is coming to an end.

The NSS will closely follow the debate over the coming weeks and frame its response to the consultation on the basis of that debate – and on what our members want.

Terry Sanderson said: "We look forward to our members' views on this. We hope that they will all individually respond to the consultation, but we also want to know what they would like the NSS to say as a representative body."

Please read the consultation and you can send your views to tas@secularism.org.uk with Consultation in the subject line or write to NSS (Consultation) 25 Red Lion Square, London WC1R 4RL.