This Is Where The Money Goes

In a parliamentary question in the House of Lords on 21 June, Lord Avebury asked the government to list the grants made by the Faith Communities Capacity Building Fund in 2005–06, “and those planned for 2006–07, giving in each case the names of the organisations and the purposes of the grant.”

The Parliamentary Under-Secretary of State, Department for Communities and Local Government (Baroness Andrews) replied: “The Faith Communities Capacity Building Fund is administered by the Community Development Foundation. The fund supports capacity building and inter-faith programmes which, in turn, will support the development of faith-based organisations and increase participation of faith communities in civil society. In 2005–06, 588 organisations were awarded funding totalling £7.7 million. Details can be found on the Community Development Foundation website at www.cdf.org.uk . Grants are awarded as a result of an independent assessment process; it is not possible to say who will receive funding in 2006–07 as the second round for applying has not yet opened.

And tucked away on the website of the “Holy See” (the Vatican’s political arm) is this little gem: “In January 2003, President Bush introduced PEPFAR, the President’s Emergency Plan for AIDS Relief, and set up the single largest fund to defeat the AIDS epidemic. This fifteen billion dollar program is in addition to the fiscal year budget in the United States of 21 billion dollars (for 2006). These funds are administered throughout the world from the Office of the Global AIDS Coordinator. The Catholic Church administers the majority of these funds through several different programs.”

We can think of no organisation less appropriate to administer such a fund. Faith-based welfare? For millions of AIDS victims around the world, it’s lethal. 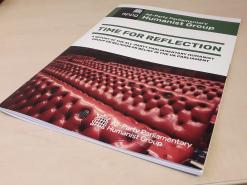 The automatic right granted to 26 C of E bishops to sit in the House of Lords should be repealed, according to a report published today.