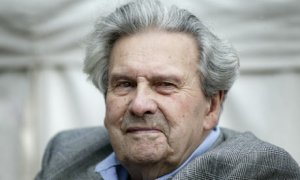 Sir Ludovic Kennedy was a long-time honorary associate of the National Secular Society and one of whom we were particularly proud.

During a long and eventful career as a journalist, broadcaster, author and campaigner for social justice, Sir Ludovic made a huge contribution to the abolition of the death penalty in Britain through his rigorous investigations into miscarriages of justice. It was he who proved that Timothy Evans — a young man who was wrongly hanged for the murder of his wife — was innocent.

Kennedy later campaigned for the legalisation of voluntary euthanasia and wrote an influential book about atheism All in the Mind – a Farewell to God. The NSS received regular requests for contact details for Sir Ludovic from journalists and researchers even after he had moved into a nursing home, proving that his legacy is still important and will live on.