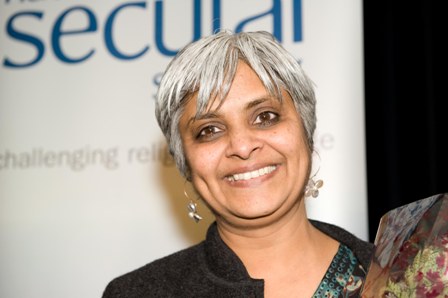 Secularism for me is the house that is Southall Black Sisters, where black and minority women, of all cultures and religions and none, co-exist freely in an atmosphere of tolerance and respect. It is not about the absence of religion but the absence of religious power, a freedom from patriarchal straightjackets that might stifle our lives, dreams and aspirations.

Accepting the award, Pragna gave a very moving acceptance speech in which she commented: "If you had asked me 20 years ago what one of the biggest struggles would be in 2010, I would not have said the struggle for a secular society. Yet here we are today."

Pragna Patel speaking at an NSS conference on secularism and feminism and at the Society's Secularism 2012 conference.