Ep 49: The early history of secularism 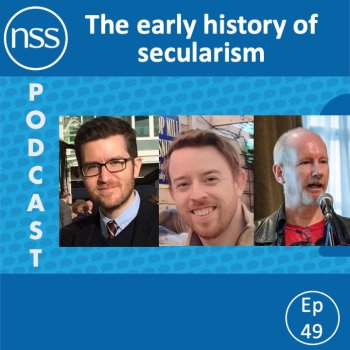 The term 'secularism' was coined in 1851. But Britain's tradition of freethinkers, atheists and radicals goes back much further than that.

In this episode, Emma Park delves into the origins of secularism in the late eighteenth century, its rise to prominence in the mid-nineteenth century, its gradual separation from much of radical politics into the twentieth – and the link between radicalism, freethought, and shoemaking.

Three experts join Emma for a roundtable discussion: Matthew Kidd, a historian of nineteenth-century radicalism; Paul Fitzgerald, a.k.a. Polyp, who is writing a graphic novel about Thomas Paine; and Eoin Carter, whose PhD is on Richard Carlile.

Paine's criticism of organised religion in his Age of Reason made him unpopular in England, but heavily influenced Richard Carlile, a campaigner for press freedom who was imprisoned for blasphemy. Carlile in turn was a seminal figure in the burgeoning freethought and radical movements in which Charles Bradlaugh, future founder of the NSS, grew up. Secularism flourished among other radical movements in the mid-nineteenth century, but by the end was losing ground politically.

This podcast is designed to complement the NSS seminar on George Jacob Holyoake, led by biographer Ray Argyle, that was held at Conway Hall online on 22nd April.

In the latest episode of the NSS podcast, join @DrEmmaPark with guests @EnglishRadical, @SbonesTompaine and @Eoin_Carter as they explore the early history of secularism.
Click to tweet