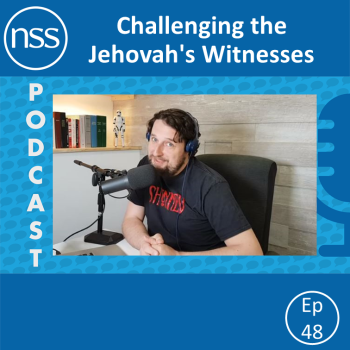 Lloyd Evans was an elder in the Jehovah's Witnesses, before he left the organisation in 2013. He has since been campaigning to expose its workings to the public.

In this episode, Lloyd speaks to Emma Park about the JWs' history and key beliefs, including their doctrine of refusing blood transfusions, and the practice of 'shunning' people who decide to renounce their religion. He discusses the ways in which the organisation is structured so as to facilitate the concealment of child abuse from external investigation.

Lloyd also argues that there is a pervasive deference to religion, both within the NHS and in British society more generally, that prevents the harm that can be caused by organisations like the JWs from being properly challenged.

Emma is then joined by the NSS's Megan Manson to reflect further on the JWs' influence over NHS policy through their 'hospital liaison committees'. The JWs arguably illustrate the problems with allowing 'the advancement of religion' to qualify an institution as a charity.

Lloyd Evans left the Jehovah's Witnesses in 2013. He has since been campaigning to expose its workings to the public. In Ep 48 of the @NatSecSoc podcast, he speaks to @DrEmmaPark about the harm the JWs can cause.
Click to tweet