Ep 46: Forced marriage and the importance of RSE 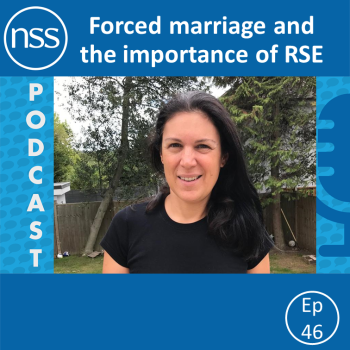 A marriage can be forced even if it doesn't involve the threat of physical violence. In some faith communities in Britain, young people's freedom to choose their future spouse can be denied in subtler ways.

In this episode, Emma Park speaks to Eve Sacks about arranged and forced marriages in the Haredi community. Eve is a board member at Nahamu, an organisation which aims to counter religious extremism within Britain's Jewish population. Eve argues that the crucial problem with forced marriage is that it deprives participants of their autonomy, as well as putting them at risk of more concrete harms.

Emma is then joined by Megan Manson, the NSS's head of policy and research, to reflect on the role of Relationships and Sex Education (RSE) in reducing the risk of forced marriage. They discuss the importance of making RSE mandatory for all schoolchildren, and the difficulties of allowing religious schools to continue to teach the subject 'within the tenets of their faith'.