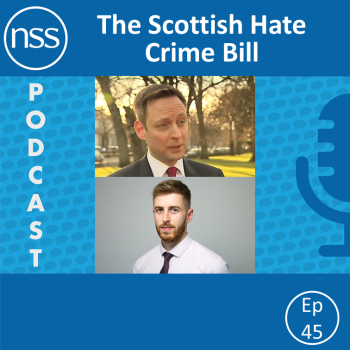 This episode is about the Hate Crime and Public Order (Scotland) Bill, which was finally passed by the Scottish Parliament on 11th March, after much controversy.

The NSS was heavily involved in lobbying the Scottish government during the drafting of the Bill, and in securing amendments during its passage through the Scottish Parliament, so as to ensure that it would provide sufficient safeguards for freedom of speech about religion. The Bill will abolish the common law offence of blasphemy, a step for which the NSS has long been campaigning. It will also, however, create a series of new offences of 'stirring up hatred' against groups defined by reference to protected characteristics, including religion. Campaigns by the NSS and others obtained an amendment that will give greater protection to 'expressions of antipathy, dislike, ridicule or insult' towards religion. However, the Bill is still likely to exert a chilling effect on free speech in Scotland.

In this episode, Emma Park speaks to Liam Kerr MSP, who was on the Justice Committee that scrutinised the Bill during its passage through Parliament. She then speaks to Jamie Gillies, the spokesman for Free to Disagree – a coalition of organisations that came together to oppose the Bill, including the National Secular Society, the Christian Institute, the Peter Tatchell Foundation, the Network of Sikh Organisations and the Index on Censorship.

I'm listening to Ep 45 of the National Secular Society podcast, about the controversial Hate Crime and Public Order (Scotland) Bill. With Liam Kerr MSP and Jamie Gillies of Free to Disagree.
Click to tweet