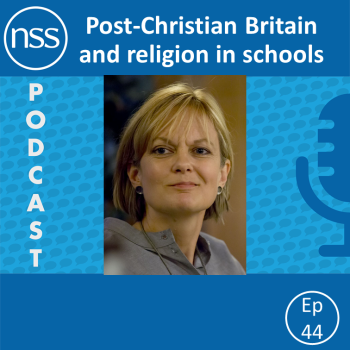 This episode is about the place of religion in Britain today, both in society in general and in schools in particular. Emma Park interviews Linda Woodhead, professor of religion at Lancaster University.

In May this year, Linda will be giving a lecture series at Birmingham University entitled 'Values are the New Religion: Britain's post-Christian Culture'. The first part of her interview deals with her research into the decline of Christianity in Britain over the last 100 years, the reasons why this has happened, and to what extent non-religious people look for analogous systems to give their lives meaning and structure. During the pandemic, the NHS may even have become a surrogate for organised religion.

If Britain is becoming less religious, this raises the question of what its place ought to be in our education system. The admissions procedures commonly used by faith schools can unfairly discriminate against non-religious children. There are also many problems with the way Religious Education is currently taught. The Welsh government is reforming its RE provision: there is a strong argument for doing the same in England, but successive administrations have dragged their feet.

Emma is then joined by Alastair Lichten, head of education at the NSS, to reflect on Linda's words and give the NSS's perspective.

I'm listening to the NSS podcast. This week's episode is about the place of religion in Britain today, both in society in general and in schools. Emma Park interviews Linda Woodhead, professor of religion at Lancaster University.
Share this episode