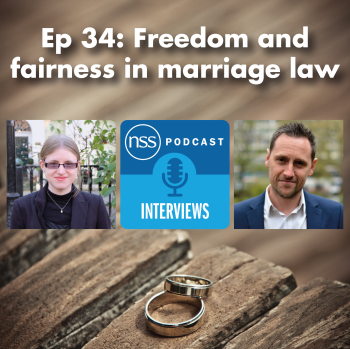 In this episode, Emma Park speaks to Stephen Evans and Megan Manson from the NSS team about marriage law reform in England and Wales. English marriage law has developed over the centuries with different religious groups being given compromises and exemptions.

Sometimes marriage is permitted outside, sometimes it must be within a licensed building; different set forms of words are required to make it legally binding; and if you're not religious, or if you want to marry someone of the same sex, then your options are much reduced.

The NSS has long campaigned for reforms, and now the Law Commission looks set to support some of them. Stephen and Megan discuss the Law Commission's proposals, the NSS's stance on issues such as unregistered Islamic marriages and Humanist weddings, and how likely it is that positive reforms will happen under the current government.