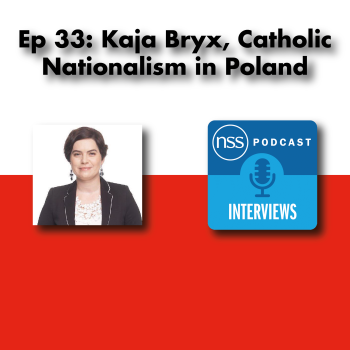 In this episode Emma Park speaks to Kaja Bryx, president of the Polish Rationalist Association, about the influence of the Catholic Church and the religious right in Poland.

Kaja and Emma discuss the impact that party and president have had upon legislation, education and public life in Poland.

They consider the privileges already granted to the Catholic Church in its post-Communist agreement with Poland, and whether these are likely to be reinforced under the current administration. They look at the perilous state of LGBT-inclusive education in schools, the current restrictions on women's reproductive rights, and the different views held about them in Poland. They also discuss what the Polish Rationalist Association has been doing to counter the influence of Catholic organisations.

Emma also joined by Aleksandra Myslek, an NSS council member, to discuss the NSS's latest submissions to the UN on Poland and the impact of the Catholic Church on children's education. Aleks, who is a professional pianist, has also kindly provided the music for this episode.

The latest National Secular Society podcast looks at rising Catholic nationalism in Poland, its influence on right wing politics and the threat to secular democracy. Featuring the president of the Polish Rationalist Association, @Kaja_Bryx
Click to tweet