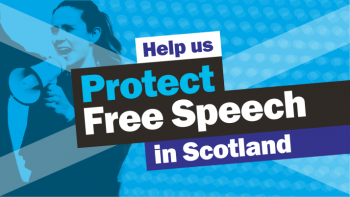 Where do you draw the line between safeguarding people's protected characteristics and guarding their right to freedom of speech?

The new Hate Crime and Public Order (Scotland) Bill, introduced in April, purports to protect groups defined by reference to protected characteristics, including 'religion' or 'perceived religious affiliation'. But some have argued that the proposed legislation will chill free speech about religion.

In this episode, Emma Park is joined by Neil Barber, communications officer at the Edinburgh Secular Society, along with the NSS's Stephen Evans, to give a detailed analysis of the language of the bill relating to offences of 'stirring up hatred'. They argue that the bill is likely to make it all too easy to shut down valid debate about religion.

While the bill will abolish the common law offence of blasphemy against Christianity in Scotland, there are good reasons for thinking that the new statutory offences will simply be a multi-faith version of the former.

Make a stand for freedom, fairness and human rights by adding your voice to the call for a secular democracy. Join the National Secular Society today. Support the podcast, share with a friend and leave a positive review everywhere you can.

I'm listening to the latest episode of the NSS podcast. Emma Park is joined by Neil Barber, and Stephen Evans to discuss Scotland's new #HateCrime bill which threatens to create a 'blasphemy law by the back door'.
Click to tweet