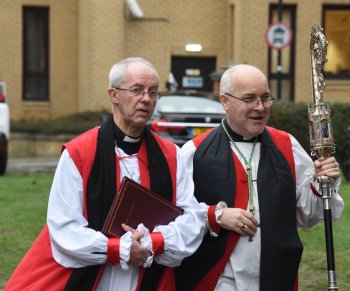 The archbishop of Canterbury's affirmation of his church's official rejection of gay sex and same-sex marriage this week has caused much consternation. Those upset and dismayed by the move include many Anglicans who recognise the suffering this regressive position has inflicted upon gay people around the world.

The issue of homosexuality is a source of deep and bitter divisions within the Church of England. The divisions within the wider Anglican Communion are even greater. Some national Anglican churches have taken steps toward approving same-sex relationships, while others remain sharply opposed. Ninety Anglican bishops this week issued a statement seeking to affirm and celebrate LGBT+ people. Meanwhile, Ghanaian bishops have backed a proposed law that would lengthen jail terms for gay and trans people and force some to undergo so-called 'conversion therapy'.

Here, the CofE doesn't permit same-sex marriage and does not officially bless same-sex civil marriages. Gay clergy are permitted to be in relationships, so long as they remain celibate. A cruel expectation that can only fuel loneliness, longing and, presumably, some lying.

The Anglican theological position on LGBT issues is really a matter for Anglicans. But due to the CofE's established status, its clergy have a specific legal duty to marry parishioners. So when the Marriage (Same Sex Couples) Act was introduced, the Church lobbied for a 'quadruple lock' to ensure the duty did not extend to same-sex couples. It also protected the Church of England's Canon law, which says marriage is the union of one man with one woman.

The CofE's position on this, as with abortion and assisted dying, is out of step with British social attitudes and sits uncomfortably with its status as the established church.

The Church is entitled to its dogma. But equally, secular-minded citizens should expect this to have no bearing on the affairs of state.

The absence of a separation between church and state means the Church continues to wield incredible constitutional power and is deeply embedded in public life. Its canon law forms part of the law of the land. Parliamentary sittings begin with Anglican prayers. Twenty-six CofE bishops sit as of right in our legislature, shaping laws that affect us all. A quarter of all state funded primary schools and hundreds of secondary schools are run by the CofE. A privilege the Church uses to push its theology in schools and meet its target of doubling the number of "young active disciples" in England by 2030. All very educationally inappropriate.

The privileges enjoyed by the Church run contrary to secularist principles of equality and fairness. They have no place in one of the world's least religious countries. Its established status and privileged position within British political and public life is an absurdity that will only grow starker with time.

The Church tying itself in knots over gay sex and same-sex marriage is a reminder that the time to set the wheels of disestablishment in motion has come.

Such a move would not herald the demise of western civilisation, as some reactionaries might claim. Separation of church and state is a core enlightenment principle, born in the 'age of reason' – a period that brought secular thought to Europe and paved the way for greater liberty, equality, and individual rights. These ideas are the cornerstone of the world's strongest democracies. It's time to for the UK to embrace the concept of secular democracy fully and fearlessly.

Polling suggests such a move would sit well with the British public, a majority of whom think the Church should be separated from the state. Sixty-two per cent agree that religious clerics shouldn't have an automatic right to seats in the House of Lords.

The move would prove popular with some Anglicans too. A new book, 'Beyond Establishment' by Anglican Jonathan Chaplin, argues the CofE itself should voluntarily relinquish its privileges and established status to "free the church to pursue its own mission with greater authenticity." It's an argument we're increasing hearing from Anglicans who value church autonomy and recognise the importance of state impartiality.

Disestablishment need not be a clash between church and state. It could be progressed with the mutual understanding that a formal separation stands to benefit both. Both sides can surely recognise that maintaining a minority established church in a religiously pluralistic and largely secularised nation is unsustainable.

For that to happen, parliamentarians must be bold enough to disentangle the country from its mediaeval past. And the Anglican hierarchy must be prepared to relinquish the political power and prestige that establishment brings. Secular minded citizens of all faiths and none should unite in encouraging them to do so.