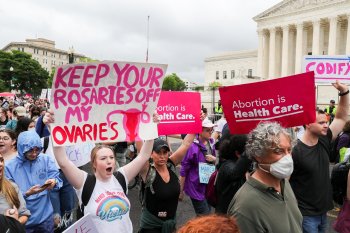 "History is not a linear narrative of progress. Rights may be won and taken away; gains are never complete or uncontested".

These words from American historian Eric Foner will surely resonate with millions of women across the United States right now who have lost their constitutional right to abortion after the Supreme Court overturned Roe v Wade.

The decision means individual states will now be able to legalise or prohibit abortion. Thirteen states have 'trigger laws' on the books, which means abortion will swiftly be outlawed in most cases. The signs are that new abortion bans in many states will be more restrictive than those from the pre-Roe era.

In America and elsewhere around the world, opposition to women's reproductive autonomy is largely driven by Christian theology – the religious idea that all human life is made in the image of God and begins at conception. Prohibitions and severe restrictions on women's access to abortion are the enshrinement of that theological viewpoint into law.

Christian conservative activists may rejoice at their recent Supreme Court victory, but abortion bans do little to reduce the number of abortions. Severe restrictions on access to abortion compel women to either seek out unsafe abortions – which can have fatal consequences – or carry a pregnancy to term against their will. Both are truly chilling prospects.

In her 1993 confirm­a­tion hear­ing to join the Supreme Court, the late Ruth Bader Gins­burg told the Senate Judi­ciary Commit­tee: "The decision whether or not to bear a child is cent­ral to a woman's life, to her well-being and dignity. It is a decision she must make for herself. When Govern­ment controls that decision for her, she is being treated as less than a fully adult human respons­ible for her own choices."

These real-world implications of abortion bans demonstrate what secularism really means to ordinary people's everyday lives. The undermining of American secularism is going to hit women hard, particularly the most vulnerable.

But as Katherine Stewart explained in a piece for The Guardian, the dismantling of America's wall of separation between church and state is all part of a long-term Christian nationalist agenda to impose a certain moral and religious vision on the population at large. Millions of dollars have been ploughed into capturing the courts and promoting a warped interpretation of "religious freedom" that entails privileging Christian nationalists' religious ideology at all other citizens' expense.

An obvious question is could it happen here?

Obviously, a government minister saying something doesn't make it so. Besides, the Supreme Court judges who reversed Roe v Wade made similar noises during their confirmation hearings. But the UK is not the USA, and Britain's secular outlook means the ground is far less fertile for the Christian Right.

In many ways, reproductive rights here are heading in a positive direction. Abortion was decriminalised in Northern Ireland in 2019. Early medical abortion at home has recently been made more freely available. And the Scottish Government is committed to legislating for buffer zones around abortion clinics so women can access services free from harassment and intimidation.

But all of this remains contested. A few Christian parliamentarians appear keen for the Supreme Court ruling to open up the debate. US Christian Right groups have spent at least $280m fuelling campaigns against the rights of women and LGBT people across five continents, including Europe. In Poland, where church and state grow ever closer, an activist is facing three years in prison for sending abortion pills to a twelve-week pregnant woman and victim of domestic abuse during lockdown. Last week, Open Democracy revealed that a UK anti-abortion group that wants to replicate America's backlash against reproductive rights has placed more than a dozen interns in MPs' offices since 2010.

There is no room for complacency.

Another brick in America's crumbling wall of separation that fell recently was the Supreme Court's Kennedy v. Bremerton School District ruling which paves the way for prayer and the promotion of religion in public schools. As the dissenting opinion of Justice Sonia Sotomayor said, the decision sets the US "further down a perilous path in forcing states to entangle themselves with religion".

On this issue, the UK leads the way in bad practice. State funded faith schools and laws requiring all schools to hold acts of worship mean parents' and students' freedom of religion or belief is routinely undermined. On the very day the UK government hosted a major ministerial conference on promoting freedom of religion or belief, the High Court in Belfast ruled that the application of these laws in Northern Ireland breaches human rights. The UN Committee on the Rights of the Child has repeatedly called on the UK to repeal legal provisions for compulsory worship.

These transgressions persist, not because of strong public support, but through political inertia and an unwillingness to prioritise pupils' interests over the churches.

And it's not only in education where the privileging of religion frustrates the reforms necessary to protect freedom of religion or belief or respect personal conscience.

As with abortion rights, opposition to the right to choose an assisted death is largely driven by sanctity of life viewpoints. Religious doctrine is rarely offered as justification for anti-choice positions, but often lurks beneath the surface.

Yet the growing secularity of the UK population almost desensitises us to the need for secularism. Such complacency risks hard-won equality and human rights wins going backwards.

Despite growing irreligiosity and religious indifference, religion remains a political force. UK conservative Christian lobby groups are well-funded and active across a wide range of policy issues. The Church of England's established status affords it significant influence over policymaking, extending not only to policy change, but also defending the status quo.

The lesson from America is take nothing for granted. The erosion of church and state separation is about to wreak havoc on the lives of ordinary Americans. Secularism has an important role to play in underscoring human rights and ensuring they are applied fairly. British citizens who value the choices and freedoms that flow from a secular society should be prepared to defend it.