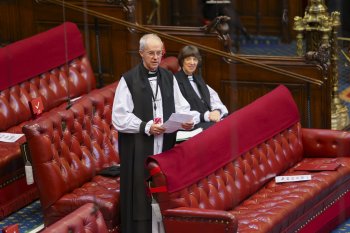 Church of England plans to give Anglican church leaders from around the world greater power in choosing future archbishops of Canterbury serve as a reminder of the need to separate church and state, argues Stephen Evans.

A row is brewing over a possible change to the process for deciding who becomes the most senior cleric in the established Church.

The Church of England is currently consulting on plans to allow foreign Anglican leaders from churches around the world to be given much greater power in choosing future archbishops of Canterbury.

According to The Times, "English priests and worshippers have expressed surprise and anger at proposals for a five-fold increase in the power that Anglican churches overseas will be given in nominating the Church of England's most senior bishop."

Their concerns centre around whether the proposals might diminish the prospect of a woman or a supporter of same-sex marriage being appointed as archbishop of Canterbury, as many Anglican churches globally still do not allow women to become bishops and most steadfastly oppose the idea of conducting gay marriages in church.

But it isn't only the Anglican faithful who might have cause to be concerned.

Through the Church's established status, the archbishop of Canterbury enjoys a significant degree of political power in the UK. This raises important questions about the appropriateness of foreign influence.

He and his bishops claim 26 seats in the House of Lords which provides unique access to the corridors of power. He is given his own annual debate to lead in parliament, has meetings with the prime minister and government ministers, and enjoys a myriad of other privileged platforms.

This extends to state occasions including coronations, which give the archbishop inappropriate political influence in a country that really should be secular. His position is charged with anointing our head of state and administering the oath, whereby the monarch vows to "maintain in the United Kingdom the Protestant Reformed Religion established by law".

And let's not forget the influence over public policy gained through the Church's role in state education. One quarter of all publicly funded primary schools in England are run by the Church – the largest single provider of schools in the country.

Overseas influence in who fills this role can only widen the democratic deficit of this ludicrous arrangement. The current bishops' bench in the House of Lords has already been described by the incumbent archbishop Justin Welby (pictured) as "the most orthodox since WWII." Greater influence from reactionary bishops from around the world can only further intensify the disconnect between the Church and the country's increasingly secularised population.

But who leads the Church of England – and the wider international Anglican Communion –should really be nobody's business but the Anglicans'. Disestablishing the CofE and ending its privileged role in our state institutions will ensure this is the case.

Regrettably, the current constitutional settlement makes it impossible for the question of who leads the Church of England to be purely an internal matter for the Church, the way it would be for any other religious denomination.

At present the decision is made by the reigning monarch on the advice of the prime minister, who in turn receives a shortlist of two names from an ad hoc committee called the Crown Nominations Commission.

Boris Johnson's baptism into the Catholic faith called into question the prime minister's role in all of this and highlighted the absurdity of an established church in a modern pluralistic, multifaith democracy.

Establishment is a relic from an age when church and nation were indistinguishable one from another. Today, fewer than 1% of England's population attend church on a typical Sunday. Younger people are increasingly unlikely to identify with any faith. And surveys suggest that a majority of the UK public don't belong to a religion. This reality should be reflected in a new, secular, constitutional settlement.

Then, questions about who becomes the archbishop of Canterbury can be a matter solely for Anglicans to decide ­– which is the way it should be.

As the National Secular Society prepares to send a major report on the subject to MPs, Prof. Steven Kettell says the establishment of the Church of England is incongruous with the beliefs and attitudes...