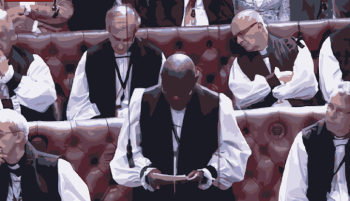 The UK is one of the 'most intolerant' countries in Europe towards Christians. That's the extraordinary claim of a report published this week by Observatory of Intolerance Against Christians in Europe (OIACE).

The report identifies the UK, France, Germany, Spain and Sweden as the top five countries driving what it describes as a "rising phenomenon" against Christians.

A few examples of the supposed "discrimination" and "intolerance" faced by UK Christians illustrate just how scant the evidence is.

One of the more bizarre examples provided by the report is schools being "pressured to provide atheist content".

What's being referred to here is one instance of a Church of England controlled multi-academy trust agreeing to provide a meaningful alternative for pupils withdrawn from Christian collective worship after two parents launched a legal challenge. The parents simply wanted their local (non-faith) school to provide a more inclusive environment for their children.

The authors are looking through the wrong end of the telescope here. Those on the receiving end of intolerance and discrimination when it comes to state education are the pupils locked out of local faith schools due to discriminatory admissions policies – and those compelled to take part in Christian rituals by a law that forces all schools to hold daily acts of Christian worship.

But this report never lets the reality get in the way of its victim narrative.

The report's authors go on to cite 'buffer zones' as further evidence of victimisation of Christians. These are the zones introduced around abortion clinics by a handful of local authorities where women were facing harassment and intimidation when accessing healthcare.

It takes a very myopic mindset to refuse to recognise that the right to oppose abortion shouldn't interfere with the fundamental right for women to make individual reproductive choices and access sexual health services.

The report goes on to claim the requirement on schools to provide LGBT inclusive relationships and sex education; the refusal to allow religion-run adoption agencies to discriminate against same-sex parents; and even the inclusion of places of worship in measures to curb the spread of coronavirus indicate a "decline in religious freedom".

The point entirely and intentionally missed by this report's authors is that human rights are the basic rights and freedoms that belong to everyone, not just Christians. In pluralistic societies, competing rights sometimes clash – and a balance needs to be struck. When the practicing of your religion encroaches on the rights and freedoms of others, a restriction on your right may be reasonable. The belief that not always entirely getting your own way amounts to discrimination is a highly narcissistic and flawed approach to human rights.

The appalling treatment of Christians and other religious and nonreligious minorities in countries such as Afghanistan, Somalia, Libya, Pakistan, Yemen, Iran, North Korea, China, and Nigeria is deserving of everyone's attention. This year's #RedWednesday campaign did a fine job of highlighting the persecution faced by millions of Christians, not least the girls and women living under the constant threat of abduction, sexual violence and forced conversion.

But claiming that the human rights of Christians are "under pressure" in a country where, in almost all walks of life, Christianity is uniquely privileged, is simply absurd.

Nevertheless, hardline Christian advocacy groups continue to push a false narrative of Christians being persecuted here. So loud became their calls that in 2016, the Equality and Human Rights Commission carried out a comprehensive review of equality and human rights law relating to religion or belief.

The Commission's findings gave lie to the claim that Christians are being unfairly treated. Their report said the law strikes the right balance between protecting religious freedom and upholding the right to non-discrimination.

The labelling of National Secular Society backed legislative attempt to end the automatic right of 26 Church of England bishops to seats in the House of Lords as an 'incident' of anti-Christian intolerance is further evidence of the crybully tactics deployed by unscrupulous Christian campaigners.

But the cries of persecution will undoubtably grow louder as those wanting to impose their beliefs on others see their privileges challenged.

Secularism isn't intolerance of Christian beliefs. It's the view that those beliefs shouldn't be elevated or privileged above others.

All around the world well-funded Christian activists are lobbying for laws to allow them to discriminate and impose their beliefs on people who don't share them – all under the guise of 'religious freedom'.

Human rights advocates everywhere need to be wise to these bad actors claiming victimhood to gain special privileges to trample on the rights of others.