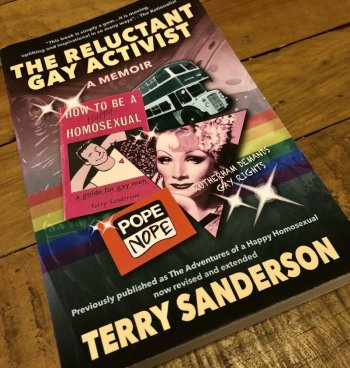 "How did I, an ill-educated poverty-stricken lad from a Yorkshire mining town, get swept up in the creation of two of the most amazing and unexpected social revolutions of the past century – gay rights and secularism," asks Terry Sanderson on the first page of his autobiography.

Sanderson was born in 1946 in Maltby, near Rotherham. As a youth, Sanderson knew that he was different to other boys but did not know the reason until he overheard his aunts whispering that the singer Johnnie Ray was "one of them homosexuals". He looked up the word in the dictionary and realised it described him. This was a relief as he reasoned that if there was a word for it there must be others like him.

Until 1967, homosexual acts between men were illegal and even after decriminalisation, there was a strong social stigma. As a young man, Sanderson struggled to meet other gay men until he saw a newspaper advert for 'The Campaign for Homosexual Equality'. He wrote to them and was put in touch with a group in Sheffield. The group was mostly social as its members feared the consequences of public activism. Sanderson later founded a Rotherham group that gradually became more involved in activism.

Sanderson's activism began when he decided to organise gay discos, which led to a long-running battle with the local council which refused to hire out their rooms for gay events. Over the years he became increasingly involved in gay activism as a writer and campaigner. He also wrote books providing advice for gay men such as How to be a Happy Homosexual.

Sanderson's family were never very religious. As a youth he had experimented with different Christian denominations and concluded it was not for him. As he became more involved with gay activism, he saw how much opposition to gay equality came from religious groups. He joined the National Secular Society and became increasingly involved when his partner Keith Porteous Wood became general secretary in 1996. Sanderson joined the NSS council of management and was president from 2006 to 2017.

There was a lot of overlap between gay and secularist activism. Sanderson notes: "I saw the value of secularism in protecting gay rights.

"Religion is the greatest opponent of justice for homosexuals and when laws are made according to religious principles, as they are in much of the Islamic World, then homosexuals become criminalised, persecuted and in constant peril."

Major campaigns during Sanderson's time at the NSS included the abolition of England's blasphemy laws, last used against Gay News in 1977 and finally abolished in 2008, and the protest against the state visit of Pope Benedict who had declared gay and transgender people "a bigger threat to mankind than even the destruction of the rain forests". The NSS also campaigned against religious exemptions to equality law.

During Sanderson's time as NSS president, the organisation shifted its focus from atheism to secularism. Sanderson explains that arguing about religious scripture and belief achieves little and often serves only to entrench the believer's views. However, limiting the political power of religious groups prevents them from imposing their beliefs on others. He has also defended the right of street preachers to read passages from the Bible that condemn homosexuality because his experiences in gay activism have taught him the value of free speech.

In 2017, Terry Sanderson was diagnosed with bladder cancer. The epilogue describes his treatment, which has so far been successful but nevertheless forced him to confront his mortality. His final message is to the next generation. He reflects on the incredible progress that has been made in gay rights in his lifetime. He warns of the growth of religious fundamentalism and notes that homophobia is still widespread. He says that it will be for the next generation of gay people to resist attempts to make them suffer as previous generations did.

The Reluctant Gay Activist is an excellent account of the gay rights and secularist movements as well as an insight into Sanderson's personal history. It shows us how much the world has changed during his lifetime whilst reminding us that we should ensure that future changes are in a positive direction.