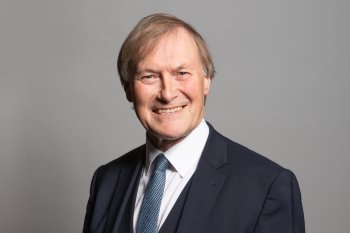 The brutal killing of David Amess, stabbed to death at his Essex constituency surgery last week, was a vile, cowardly attack on decency and democracy.

The utter senselessness and callousness of this killing makes it hard to comprehend.

MPs and commentators have understandably expressed shock and grief, taken time to remember a man who dedicated his life to public service, and reflected on his legacy.

But the national conversation around Sir David's killing has also taken a bizarre turn on the issue of what caused it.

In no time at all commentators were blaming the "toxic political discourse" and "social media internet trolls" who hide behind anonymity while spreading hate.

This certainly is an issue, but it doesn't appear to be the issue, not as far as this murder is concerned.

The crime is being investigated as a terrorist incident. The suspect, Ali Harbi Ali, a Briton of Somali heritage, appears to have links to Islamic extremism, and was previously referred to the counterterrorist Prevent scheme. The Crown Prosecution Service will submit to the court that the murder had both religious and ideological motivations.

Nevertheless, the conversation has remained fixed on social media abuse. It's almost as if the facts were inconvenient to the narrative, so have been ignored.

The only mention of Islam in the many moving tributes to David Amess in Parliament on Monday was in the context of 'Islamophobia'. Politicians appear keener to debate the definition of 'Islamophobia' than tackle Islamist extremism. Many seem more interested in undermining Prevent and making counter-radicalisation efforts as toothless as possible than advancing ways to keep society and those at risk of radicalisation safe.

This perhaps speaks to the troubling political influence of certain Muslim lobby groups who are more interested in peddling victimhood than addressing the issues of extremism within Islam.

We all need to be a bit less squeamish about this. Research last year found the majority of British Muslims are concerned about Islamist extremism and support the principles behind the Prevent programme. This isn't surprising. Muslims who see no contradiction between their religious identity and loyalty to British values so often find themselves at the sharp end of Islamist intolerance.

There's nothing 'Islamophobic' about addressing concerns shared by Muslims and non-Muslims alike.

We must accept that the poison of Islamist extremism is prevalent in Britain and poses a real threat to our liberal values and fragile democracy. There is an enemy within. It's not Muslims; it's those who seek to use violence and threaten basic liberal values such as freedom and democracy. MI5 is aware of more than 43,000 people who pose a potential terrorist threat to the UK. Ninety per cent of the watchlist is thought to be made up of Islamic extremists.

The separatist ideology at the root of Islamist extremism is being preached in British mosques - more than half of which are now thought to be under the control of the puritanical and orthodox Deobandi brand of Islam. A new book by Ed Husain, Among the Mosques, paints an alarming picture of parallel societies developing in parts of Britain, fuelled by mosques preaching an illiberal Islam that not only promotes intolerance but also fosters extremism.

Meanwhile, Islamist extremists who preach hatred, sow division, and promote sectarianism have exploited a charity system that grants organisations charitable status on the basis that they exist for the 'advancement of religion', one of the charitable purposes set out in law.

One example is a charity which is now being investigated after the NSS recently referred it to the regulator. The charity's aims and objectives include "to further the true image of Islam". On its website we found sermons praising the Taliban, encouraging Muslims to fund jihadists, and referring to the "dirty qualities" of Jews.

Then consider that this year, in Batley, an intolerant minority of extremists protesting outside school gates dictated what can and can't be taught in British schools. A teacher was effectively hounded out of his job for using cartoons of a religious figure to teach about free speech and blasphemy. He now lives in fear for his life after facing death threats. The curriculum was changed while the government stood idly by, and so-called liberals quietly acquiesced.

Meanwhile, young minds are being closed in Islamic schools that promote sectarianism and segregation, whilst paying lip service to their duty to promote fundamental British values.

One reason why this is happening is because the few people willing to speak up about it are quickly dismissed as Islamophobic, a slur akin to racism, that can seriously damage reputations.

As far as politicians are concerned, these problems find their way into the 'too difficult' box: a place for all the unpopular subjects that governments and their civil servants aren't prepared to confront. So instead, lawmakers fixate on laws to crack down on speech and stop people being horrible to each other on the internet.

People should definitely stop being horrible to each other on the internet. And public servants must be free to do their jobs without fear and intimidation. But that alone won't address the myriad problems posed by radical Islam.

There was a moment in 2015, during David Cameron's premiership, when the government appeared determined to confront Islamist extremism by defending secular liberal democracy and building a more cohesive society. But many in positions of power now seem to have given up.

Never mind being willing to tackle the problem. The discourse following the killing of David Amess suggests we hardly seem willing to name it.