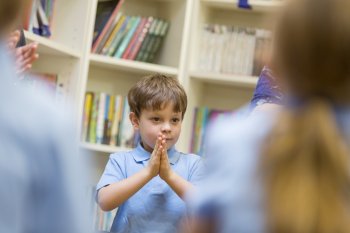 It was a tale of two bishops in the House of Lords last week when peers debated a bill to replace the duty on schools to hold acts of Christian worship with a requirement to provide inclusive assemblies.

The retired Anglican bishop of Oxford, Richard Harries, supported reform of the law, arguing that the present legal situation "simply does not reflect the society in which we now live". The serving bishop of Oxford, Steven Croft, speaking from the bishop' bench, argued that the "present arrangement works well".

The proposed law, tabled by Baroness Burt, would leave faith schools, including those controlled by the Church of England, untouched – and would only apply to schools without a religious designation.

Nevertheless, the bishop, who had only just finished leading prayers in the same chamber, urged his fellow parliamentarians to block it. He said worship was a "vital part of what it means to be human" and the majority of the nation's children and young people shouldn't be denied "the experience of spiritual, moral, social and cultural development connected to a living tradition". His tradition, obviously.

Underneath the self-serving rhetoric was a warning that the values of Western civilization are essentially Christian—and if Christianity withers on the vine, the associated values might die with it.

The extent to which the values of a liberal democracy flow from a Christian moral framework is debateable. But given that we're already living in a post-Christian society, it is clear that what we value in Western society holds strong, despite Christianity's decline. For many people, Christianity's diminished influence has facilitated a freer and fairer Britain. It's no coincidence that the least religious societies tend to be the most peaceful, prosperous, and equitable. And let's face it, the Universal Declaration of Human Rights offers a more useful and relevant ethical blueprint than the Ten Commandments, with their prohibition of free speech and talk of slaves, oxes, and donkeys.

The idea that without a strong Christian presence in public life, we'll all go to hell in a handcart, is simply false. It certainly doesn't justify religious worship being imposed on people through legislation.

The bishop, not relying solely on this line of argument, said collective worship has other practical benefits, providing "a time to pause and reflect; to gather in community; to mourn in times of tragedy; to foster common values; to celebrate festivals, and to build religious literacy".

All the above can be better delivered through inclusive assembles, which Baroness Burt's bill proposes, along with a renewed commitment to citizenship education. Schools play a vital role in transmitting the common values of society to future generations. Acts of religious worship are neither helpful nor desirable in achieving this aim.

In defending compulsory Christian worship, the bishop was merely using his privileged position to further the interests of the Church and try to justify the unjustifiable.

The simple truth is that laws mandating worship don't belong in a modern, pluralistic liberal democracy – especially one that respects the principle of freedom of religion or belief. Young people should be given the tools and the freedom to develop their own beliefs.

This is also the view of the UN Committee on the Rights of the Child, which has called on the UK to repeal legal provisions for compulsory attendance at collective worship in publicly funded schools, and to ensure children can independently exercise a right to withdraw from any religious observance that does take place.

The retired bishop, Richard Harries, told peers he supports the Bill "because Christianity is fundamentally committed to free choice. The only good reason for believing in a religion is because you believe and personally recognise it to be true."

Free choice is one thing reasonable people of all faiths and none should be able to agree on. It should be a matter of deep shame for the Church of England that its bishops still support their religion being imposed by law.

Thankfully, peers rejected the bishops' plea and the bill progressed unopposed. However, without government support, it is unlikely to become law.

The current collective worship requirement is a dead letter law that brings the UK into disrepute. The government should recognise this reality and liberate schools from the compulsion of religion.