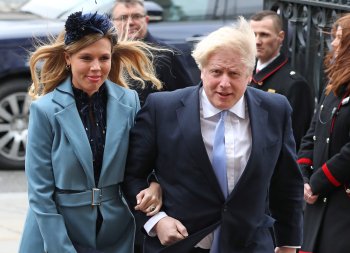 In light of his Catholic wedding, Boris Johnson has handed over the duty of advising on the appointment of bishops. Megan Manson asks why the prime minister should have any business in church affairs in the first place.

A head of government will no longer advise the state religion on appointing its clerics because he got married according to the rites of a different sect.

It's a story we might expect from a distant, troubled theocracy. But it's exactly what's happened here in the United Kingdom following Boris Johnson's surprise Catholic wedding.

The wedding, coupled with Johnson's infant baptism into Catholicism, means one can convincingly argue he is a professing Catholic. And according to the Roman Catholic Relief Act 1829, nobody "professing the Roman Catholic religion" may advise the crown "directly or indirectly" in the appointment of Church of England bishops.

Thanks to reforms introduced when Gordon Brown was prime minister, when there's a vacancy for a bishop the prime minister no longer chooses nominations for bishops from a list. The PM's job is to pass a name which is pre-chosen by the Crown Nominations Commission to the queen. But as Joshua Rozenberg has argued, it still seems fair to say this constitutes advising the crown on the appointment, at least "indirectly".

If Johnson continued doing this, he could face being found guilty of "a high misdemeanour, and disabled for ever from holding any office, civil or military, under the crown". So understandably lord chancellor Robert Buckland (a practising Anglican) is taking on the job instead to avoid any potential legal cases.

The whole fiasco raises uncomfortable points about the established church's impact on our democracy.

The first point is that anti-Catholic bigotry still lingers on the statute books. The law barring Johnson from advising on bishops is explicitly anti-Catholic – a prime minister belonging to any other faith, or one of no faith, could perform this duty without breaking the law. As one No 10 source said: "It's an incredibly anachronistic thing that a Jew or a Muslim could nominate a bishop but not a Catholic."

It's by no means the only example of anti-Catholicism at work in our state. Catholics are explicitly prohibited from becoming the monarch. Indeed in 2018 Princess Alexandra of Hanover lost her place in the line of succession after deciding to become a Catholic. The coronation ceremony also has anti-Catholic overtones. The anti-Catholic discrimination within our constitution is completely at odds with our supposed values of equality and tolerance. It surely does nothing to alleviate entrenched sectarian divisions and resentment, particularly in Northern Ireland and Scotland. And it weakens our ability to speak out against state-endorsed oppression of religious minorities in other countries, such as Ahmadi Muslims in Pakistan.

And perhaps the more obvious point is: what business does any government minister have in appointing bishops? It makes about as much sense as the PM advising on the next chief Druid, or the next England captain.

The state's role in appointing bishops exposes weaknesses in our constitution when antiquated laws clash with the realities of the 21st century UK's pluralistic society. It also creates a convoluted process for the church - which would arguably be better served by disestablishment, as it would have the independence to pursue its mission without state interference.

The relationship between the head of government and the bishops serves as a reminder of the bishops' unique position within parliament. Twenty-six C of E bishops are granted specially reserved seats in the House of Lords as of right. Iran is the only other country to automatically grant seats to clerics in its legislature. The Anglican bishops wield power both in terms of their ability to vote on issues ranging from abortion to same-sex marriage, and their access to key decision-makers in the corridors of Westminster. Their presence in the House of Lords is an anti-democratic elephant in the room.

Handing the job of advising on bishops over to Buckland saves the government from the task of tackling these knotty problems. It's a fudge, and it's one that will probably work for the time being.

But other fudges made to accommodate the established church are getting harder to ignore - and have a more direct impact on people in Britain. Consider, for example, why one third of our state schools are (mostly C of E) faith schools, and why we have laws requiring Christian collective worship in all state schools. In the increasingly irreligious and religiously diverse society of the UK, the discriminatory nature of faith schools and collective worship stands out like a sore thumb.

Once again this stems back to the church's ties to the state. This is all made possible thanks to the raft of exemptions put in the Equality Act 2010 in order to avoid the question of religion in schools. During the drafting of the act the Joint Commission on Human Rights, which played a key role, recommended the government "revisit" the collective worship law. It also pointed out the incompatibility of allowing faith schools to discriminate on religious grounds in their admissions criteria.

But rather than tackle this issue head-on by challenging the Church of England's role in state education, the government opted to create exemptions in the act that would give the church and other religious organisations free rein to discriminate against children on the basis of religion or belief. It opted for a fudge, to prop up the status quo and to avoid confronting the more challenging, fundamental problems caused by the relationship between church and state.

Over half the British population have no religion. Little more than 10% are affiliated with the Church of England, including only one per cent of 18-24 year olds. Prior to the pandemic less than two per cent of the population regularly attended C of E church services. With every passing day the UK is outgrowing the established church, whose privileged place in our democracy looks increasingly unsustainable.

The problems caused by Johnson's apparent Catholicism acutely highlight the conflict between the ancient codes directly flowing from the establishment of the church, and the modern concept of human rights and equality for all. There is simply no getting away from the fact that you cannot simultaneously have a state religion, and a democracy that treats all citizens of all religion and belief backgrounds equally. The problems the PM's marriage has highlighted should prompt divorce proceedings between church and state.

As the National Secular Society prepares to send a major report on the subject to MPs, Prof. Steven Kettell says the establishment of the Church of England is incongruous with the beliefs and attitudes...