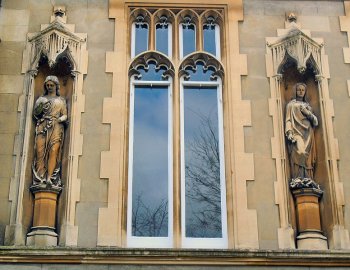 A pro-vice chancellor's remarks suggest the governance of St Mary's University, Twickenham is heading in an inappropriate direction. This shows the need to oppose religious control of universities, says Keith Sharpe.

In introducing his recent bill to defend freedom of speech in universities the secretary of state for education, Gavin Williamson, spoke of the "chilling effect of censorship", expressing concern about 'cancel culture' and 'deplatforming' as a means of limiting freedom of expression.

I have previously drawn attention to the 15 publicly-funded faith universities in the UK. The governing bodies of these universities are dominated by ex-officio members of a church rather than individuals appointed according to Nolan principles of public service. How can a governing body chaired by and comprised primarily of individuals whose first allegiance is to the doctrines of a particular religious organisation be confident that this does not influence the values of the university they govern?

One way in which the governors of faith universities can limit freedom of speech and introduce religious censorship is in the appointment of their vice-chancellor, requiring candidates to be practising members of the church which dominates the institution's governance. This not only excludes many able candidates who do not share the governors' beliefs, but implies an intention to shape that institution in accordance with the governors' own particular religious doctrine.

This potential risk now seems to have become a reality, at least in one faith university. Francis Campbell was appointed vice-chancellor of St Mary's University, Twickenham in 2014 and set about making the university properly Catholic. In a recent podcast in the Spectator series 'Holy Smoke' the pro-vice chancellor for academic strategy at St. Mary's, Professor John Charmley who was appointed by Campbell, explained exactly what properly Catholic means.

First, a new post of 'director of Catholic mission' was created to promote Catholic doctrine amongst the staff and students because everybody needs to understand that "we are all children of God" and because St Mary's must work "to revive and serve the church". This is utterly inappropriate. It is not the business of any university maintained at public expense to "serve the church" or to promulgate particular belief systems. Furthermore, such a limited view of the purpose of publicly-funded education countermands the government's policy of enhancing access and participation from all parts of society.

Second, and perhaps more astonishingly, Professor Charmley went on to say that he wanted Catholic values to be embodied "in all disciplines", not just Theology. "It is our role to emphasise the eternal verities," he declared.

This is deeply worrying. The 'eternal verities' Professor Charmley refers to are not evidenced truths; they are 'revealed' truths - the doctrines of his church, such as the divinity of Jesus Christ. The university seems to be expecting all lecturers to interpret and present their subject matter in the light of Catholic doctrine. How would this imposition distort teaching and research in history or literature, for example, or biology and human evolution? In the 21st century every university should be a place of independent and free inquiry in which students are taught to think for themselves and challenge conventional wisdom based on evidence, and in which all are at liberty to pursue knowledge and truth openly without constraint.

In contrast, Professor Charmley seems to favour sustaining particular doctrines that he and the governors of St Mary's hold dear. Free speech in universities requires that academics and scholars can express unorthodox views and do not have to comply with any doctrine. Indeed, registration by the Office for Students requires that academic staff at an English higher education provider have freedom within the law to "question and test received wisdom" and "put forward new ideas and controversial and unpopular opinions, without placing themselves in jeopardy". It does not seem that St Mary's intends to meet these conditions.

The governors at St Mary's, and senior staff such as Professor Charmley, appear to place allegiance to the doctrines of their church above their duties to the university for which they are responsible. These policies should be recognised for what they are and resisted by staff and students alike. They should also be reviewed by the Office for Students, to protect academic freedom and freedom of speech in our universities.