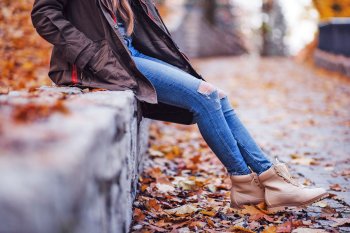 A Christian organisation which pushes misogynistic messages, including by blaming women for rape, has registered as a charity. This highlights a widespread problem which needs legal reform to address, says Megan Manson.

A religious organisation that says "female trousers are the uniform of harlots" has just become a registered charity.

Holiness Revival Movement Worldwide Europe (or 'Horemow Europe') is a Christian organisation that registered with the Charity Commission for England & Wales at the end of May. And it has a real problem with women who wear trousers.

One of the many anti-trouser rants on its website by Pastor Paul Rika says "women wear trousers because of the spirit of whoredom" and that if a woman wears "a godly skirt or gown, it does not entice or seduce any man".

The tone of the blog goes from ridiculous to creepy. Pastor Rika says wearing trousers helps women "to market her commodity to get the opposite sex aroused as they view the shape of her private part" and enables "their buttocks to appear bare, tight and seductive."

If that wasn't sinister enough, Rika continues: "Because men are naturally moved by what they see, the tendency is for them to be aroused when they see a woman in trouser (sic) walk by.

"With the exception of a few that can resist such a pull, their minds will be on what their eyes have fed on and they will continue to think about the private part of that women."

These statements already have the trappings of 'rape culture' – they promote the idea that women should dress 'modestly' because of the uncontrollable feelings of sexual desire they may otherwise induce in men. But in case there was any doubt, a tract on the website explicitly blames women's fashion choices for contributing to rape:

"What does it mean to look sexy anyway? It is simply to appeal for or suggest sex by the way you dress and apply make-up. No wonder there is increase in rape today and people are not addressing the real problem. You who dress like this is a strong contributor to the problem."

Unfortunately, Horemow Europe is by no means the only charity promoting misogyny.

Several other charities perpetuate deeply sexist stereotypes - including by encouraging women to stay at home and do what their husbands tell them. For example:

A pamphlet on this charity's website says that women generally shouldn't leave their home, but if it becomes necessary (and they have their husband's permission) to do so, they should "cover everything from their head to their feet". A woman out in public should also "refrain from raising her voice unnecessarily" and her burqa "should not be decorated or attractive".

A sermon on this charity's website entitled "Raising Godly Boys and Girls" tells women that "if you're blessed with a husband it means submitting to him" and being a wife "involves working at home and being kind". This charity registered this year.

This charity is a Sunday school for children. One of the worksheets on its website says a woman "is subject to her father, and then to her husband". It also says: "If we are honest, most women are better than men at preparing an ecclesial supper, talking to children and old people etc. and men are, in general, better at most of the more leading roles. We should all delight in what we can do and get on with it."

Another worksheet says "We see that wives should submit to their husbands, in the same way as we should all submit to Christ".

Elsewhere it gets worse. Several Islamic charities have hosted or signposted material that endorsed or condoned violence against women. These have only been taken down after the National Secular Society raised concerns with the Charity Commission:

A lecture on this charity's website entitled "The Right to Beat Wives" said it was acceptable for a husband to "punish" his wife if she challenged his authority, provided it did not "leave any sign of wound" on her. This charity was registered in December 2020.

This charity's website linked to an external site called 'Islam Question & Answer' on its 'Resources' page. Islam Question & Answer says the "many benefits" of female genital mutilation (FGM) include taking away "excessive libido from women" and reducing "excessive sensitivity of the clitoris" which is "very annoying to the husband, especially at the time of intercourse."

This charity's website hosted a book, Kitabun Nikah by Hadrat Maulana Muhammad Ibrahim and Palampuri Sahab, which said a husband was allowed to subject his wife to "mild hitting". It also appeared to condone marital rape by implying a wife cannot refuse sex with her husband: "When a man calls his wife to fulfill his desires, she should come to him although she may be near a stove (cooking)."

The book also said Allah had "granted the males authority over females"; it was a husband's "responsibility" to "keep in check the character of the wife"; and a husband should "immediately caution" his wife if he found her "freely mixing and conversing with the servants of the house or other strangers".

Finally, Kitabun Nikah instructed husbands: "If the wife is literate, she should be encouraged to study Islamic literature. Never permit her to read novels, comics and other harmful literature."

Serving a genuine public benefit is a fundamental requirement to become a charity. Promoting the subjugation and abuse of women does the very opposite. It is bizarre that on the one hand, there exist so many charities set up to support women who are victims of domestic violence, FGM and rape, while on the other the Charity Commission continues to register charities that fuel the misogyny at the root of these crimes.

While in many of these cases the commission has intervened and stopped religious charities promoting misogyny, the fact that new charities advancing the same ideas continue to register regularly demonstrates that the situation is unsustainable. Under the law as it stands the commission is left trying to play whack-a-mole, which is inefficient and unreliable.

Meanwhile the more fundamental problem remains unaddressed: organisations can become charities - with all the tax benefits and public recognition this brings - solely on the basis that they are 'advancing religion'.

That's exactly what these charities are doing – they are advancing widely-held religious ideas that women belong under the control of men, as justified by interpretations of religious texts.

It's high time we rejected the outdated assumption that 'advancing religion' is inherently beneficial and therefore a charitable activity. All charities, religious or not, should be expected to uphold the rights and dignity of women. In the UK in the 21st century, this surely isn't a big ask.

The NSS has written to the Charity Commission this week to raise concerns over the registration of Horemow Europe.