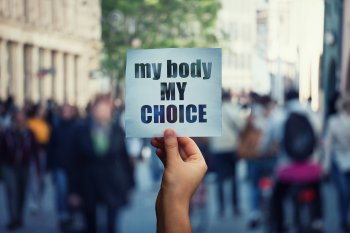 This week the UK government took the unusual step of intervening to speed up the roll out of abortion services in Northern Ireland.

It was almost impossible to terminate a pregnancy legally in NI until 2019, when Westminster voted to legalise abortion there. But since then, Northern Ireland's devolved government has failed to establish the services which were legislated for. So this week Brandon Lewis, the secretary of state for Northern Ireland in the UK government, laid new regulations before parliament, allowing him to direct the NI Department of Health to commission the services.

The government says it is taking these powers as a "necessary and proportionate" step to ensure legal and human rights obligations are upheld.

The government is right. For too long women in NI have been denied the same rights as other UK citizens to access to healthcare. With members of the legislative assembly (MLAs) continuing to fail women, an intervention to protect their human rights is required.

Stormont's Department of Health has said the matter is "controversial". Women's human rights shouldn't be "controversial". But religion's hold over politics has led the assembly to drag its heels on this issue.

For many politicians in NI, religion goes beyond a personal belief. The Bible forms the basis of their policy making. So rather than allowing women and girls the right to make their own reproductive choices on matters affecting their bodies, they seek to impose their religious dogma. The desire to restrict reproductive rights, and to control women's bodies, is a hallmark of the theocratic mindset.

Northern Ireland's propensity for fire and brimstone Christian politics explains why its previous ban on abortion was so strict – with women in almost every circumstance facing up to life in prison for a termination.

Thankfully, those laws were repealed in October 2019. But the DUP, with its strong links to the Free Presbyterian Church, has wasted little time in amending the abortion laws introduced by the UK government. The Severe Fetal Impairment Abortion (Amendment) Bill, which seeks to amend the law to ban abortions in cases of non-fatal disabilities, including Down's syndrome, has been backed by a majority of MLAs.

This despite the UN committee for the elimination of discrimination against women (Cedaw) including in its recommendations to the UK "that abortion on the ground of severe foetal impairment be available to facilitate reproductive choice and autonomy".

Just 12 MLAs voted to allow women the right to choose abortion in line with international human rights standards. As remarked by one of them, Paula Bradshaw, the bill is all about "the ongoing denial of women's rights".

Northern Ireland's four main churches – Roman Catholic, Church of Ireland, Presbyterian and Methodist – have all piped up this week to express their objections to the roll out of safe and accessible abortion services.

A statement from Catholic bishops this week branded these services as "extreme", "liberal" and somehow "discriminatory" – and called on all MLAs and political parties "not to meekly acquiesce" to the UK government's intervention.

"What Westminster seeks to impose, against the clear will of a majority of people here, is a law which blatantly undermines the right to life of unborn children and promotes an abhorrent and indefensible prejudice against persons with disabilities, even before they are born," they insisted.

But the all-male bishops do not speak for "a majority of people". A poll in 2020 showed that the majority of people in Northern Ireland don't think that abortion should be a crime (58%). There is even more widespread support to decriminalise abortion for women who are pregnant as a result of rape or incest, or in the case of cases of fatal foetal abnormality.

But the human rights of women shouldn't be dependent on religious dogma or opinion polls.

Religious adherence is diminishing across the UK, but religion's political influence isn't receding at anything like the same rate. This is to the detriment of human rights.

The objections to abortion rooted in religious ideology must be recognised for what they are – the imposition of religious dogma on all women regardless of their religion, belief or their own thoughts about abortion. Nobody with a moral objection is compelled to have an abortion and medical professionals who do not want to participate in carrying out a termination are not obliged to do so.

Religious objections must not be allowed to obstruct women's rights to appropriate medical care and to bodily autonomy. If MLAs are unwilling to fulfil their international human rights obligations and ensure women have access safe and local abortion services, they should be compelled to do so.