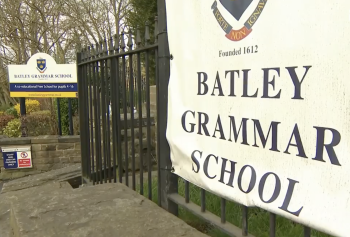 After a teacher was suspended for showing cartoons of Muhammad in class, Stephen Evans says we shouldn't accept a religious veto on critical enquiry in the classroom.

It may not be quite the lesson the teacher had in mind, but a lot of people have been schooled recently on how blasphemy codes are imposed in the modern day. Not by the law, but through outrage, intimidation and the underlying threat of violence.

A teacher at Batley Grammar School in Yorkshire who was trying to educate students about free speech and blasphemy is in hiding. Suspended, fearing for his career and under police protection.

Everyone's primary concern here should be for the safety and wellbeing of the teacher. Let's hope he keeps his job. His pupils are doing their level best to make sure that happens.

But there's a wider concern over what is deemed reasonable in a liberal democracy – and how Islamic exceptionalism has whittled that away.

If you're teaching about free speech and blasphemy, surely cartoons that created so much debate are a legitimate resource. This shouldn't be seen as unusual. Teachers often use challenging and provocative material in lessons to explore ideas and topics.

Of course, this needs to be handled sensitively. It's reasonable, for example, to give students who don't want to see these images the opportunity not to. But all the information to hand suggests the teacher in question handled this responsibly. And teachers must have the freedom to explore hot-button issues and enable students to think critically about them. We shouldn't accept a religious veto on attempts to open children's minds.

The context in which the cartoons are used is critical. The boundaries of freedom of expression are different in a classroom compared to society as a whole. But in the right environment, surely, we can trust students to see and think about images that may provoke or offend and be part of a discussion about the right to free expression – and the tensions that may exist between that and various religious worldviews. The starting assumption shouldn't be that those discussions must take place within the confines of an Islamic blasphemy taboo.

Parents and anyone else with concerns about what gets taught in schools can raise their views through the appropriate channels. But they shouldn't be allowed to disrupt and veto children's education. That's precisely what has happened at Batley Grammar School this week.

The school's kneejerk response has been a big part of the problem. Incredibly, the ringleader of the protesters appears to have been given a role in drafting the school's statement. It is therefore unsurprising that it gave an unequivocal apology for using a "totally inappropriate" resource. The teacher was suspended and thrown to the lions. Teaching on the subject matter was withdrawn.

As well as being grossly unfair to the teacher in question, it can only serve to further fuel a climate of censorship and exceptionalism around Islam – which does ordinary Muslims no favours. Indeed it's patronising to Muslims to assume they will all take offence at the use of a caricature – however crass the caricature may be. Protesters who shout loudest are not representative of all Muslims – and assuming they are plays into unhelpful stereotypes.

The school's response has been to acquiesce to religious demands. Yet still the protesters weren't satisfied and showed up the next day to demand a sacking.

A large chunk of our society appears to have learned nothing from the Salman Rushdie affair or the 2019 protests in Birmingham over relationships and sex education lessons. Appeasing fanatics will only store up more trouble for the future. It will not buy you a quiet life. Bullies need to be confronted, not placated.

If your primary concern here is the feelings of the protesters, then your priorities are misplaced. A teacher is suspended, in hiding and under police protection because of a resource used in class. That is the real issue. And despite the way some have tried to spin this story, there is no equivalence between standing up for critical thought and using bullying tactics and intimidation to shut it down.

We can't base what we teach in schools on what people subjectively find offensive. If we do, we will find ourselves having to treat any number of topics with kid gloves. Of course, lessons should be conducted in a respectful manner. There is a right to free expression. There is a right to a religion or belief. There is no right not to be offended.

We should encourage young people to think for themselves, and support teachers who make good-faith efforts to help them – even if infantile religious fundamentalists can't handle that.