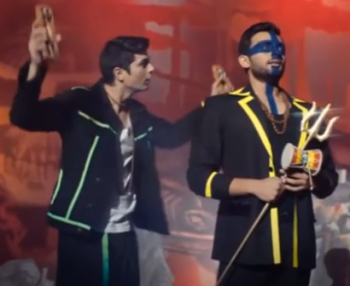 In the 'offending' scene, one of the actors plays a student, who in turn plays the role of the god Shiva in a college play. He talks about his involvement in a social media popularity contest with another god, Ram. That's it.

Cue outrage from members of the ruling Bharatiya Janata Party (BJP). The chief minister of the state of Madhya Pradesh, Shivraj Singh Chauhan, tweeted: "Nobody has the right to disrespect our gods and goddesses."

A key aide to Uttar Pradesh's chief minister Yogi Adityanath tweeted that the makers of the show should "be prepared to pay the price".

And Ram Kadam, local legislator in the state of Maharashtra, tweeted that he'd filed a police complaint about the show.

The apology from Tandav's crew was not enough to appease the extremists. After the statement was issued, a hashtag which translated to "we want arrest not apology" gained over 70,000 tweets. And so the director agreed to remove the Shiva scene.

And that was still not enough. India's Supreme Court has indicated it will not protect Tandav's creators from arrest, saying: "Your right to freedom of speech is not absolute. You cannot play the role of [a] character that hurts the sentiments of a community."

Tandav is but one of many victims of increasingly aggressive attempts by Hindu fundamentalists to censor any representation of Hinduism they don't like. Indian stand-up comic Munawar Faruqui has spent weeks in prison after allegedly making offensive jokes about Hindu deities (reports suggest he didn't even tell them). And many other Indian comedians have been attacked by Hindu nationalists for 'hurting religious sentiments' in recent years.

Even when Hindu deities are depicted in a positive light and in situations poking fun at other religions too, the Hindu nationalists are poised and ready to take offence. A rather sweet Australian commercial depicting deities from various religions enjoying a dinner party together and cracking jokes was taken off air in 2017 after Hindu fundamentalists complained about the depiction of the god Ganesha (who, incidentally, was played by a practicing Hindu).

So why are Hindu nationalists spending so much time and energy defending their gods from perceived slights? It may be partly about 'hurt sentiments' – but perhaps more importantly, it's also about ownership.

When religious leaders demand everyone, members of the religion or not, follow narrow rules for how they talk about or depict religion, they are demanding greater power for themselves. It is a very effective way of ensuring only an elite few are licensed to talk about religion, in an approved manner. The more obscure and draconian the rules, the better, because attempts to depict religion in a neutral or even positive manner still risk breaking one of those rules. As a result, those who are not in the elite inner circle of religious leaders avoid talking about religion at all. They must rely on approaching religious leaders for comment, and in doing so they give those leaders complete control over the conversation about religion.

Surrendering free speech about religion to fundamentalists is a key factor in the emergence of religious and sectarian persecution. Consider the Ahmadi Muslims in Pakistan. Their interpretation of Islam is somewhat different to the majority Sunni denomination, and as a result Pakistan's state has declared them non-Muslims. In other words, it has declared ownership of Islam. Any Ahmadi Muslim who claims to be a Muslim is subject to Pakistan's harsh blasphemy laws. And scarily, last month Pakistani authorities tried to enforce this on an Ahmadi group based in the United States.

Islam is a diverse religious tradition. But censoring minority sects because their interpretation conflicts with that of the majority corrodes this diversity, leading to religious homogenisation. Similar processes are at work in other Muslim-majority countries, where radical Islamists are replacing unique regional forms of Islam with a fundamentalist monoculture.

The same process is underway in India. India is renowned as a nation of many religions and beliefs. Its constitution establishes the nation as a secular democracy in recognition of this diversity, and that no religion or belief is valued more or less than another.

And there is huge diversity within India's largest religion, Hinduism, itself. Being considerably older, Hinduism is perhaps even more diverse than Islam. In fact, the very concept of "Hinduism" as a single religion is a relatively modern invention, used as a convenient label to describe the huge variety of regional folk traditions, practices and beliefs that have persisted throughout India across thousands of years.

The Hindutva (Hindu nationalist) ideology embraced by the BJP is proving toxic towards this diversity – both diversity of religions and beliefs, and diversity within religions. Hindutva seeks to define India as a Hindu nation. It is no coincidence that those who find themselves accused of 'offending religious feelings' in India are frequently Muslims.

But Hindutva is also corrosive even to the Hindu traditions it claims to protect. It seeks to take ownership of one particular form of Hinduism – a fundamentalist, intolerant form – and impose it on all Indians as the Hinduism. And because of the BJP's moves to tie this form of Hinduism to the state, it will result in a Hinduism designed to serve political goals rather than the spiritual and cultural needs of India's people.

To that end, Hindu nationalists are robbing Indians, including Hindus, of the ability to use shared cultural heritage to express themselves. They are creating a culture in which people are fearful to invoke the names and images of India's ancient and ubiquitous deities lest they find themselves threatened, bullied, or even imprisoned.

And as we sadly learned from Tandav's example, attempting to appease extremists with apologies and self-censorship merely adds fuel to the fire, spurring them on to seek and destroy other 'blasphemers'.

We must not be persuaded by accusations of 'offence' and 'hurt feelings' and allow religious elitists with their own political and personal agendas to take exclusive ownership of religion. Religion and its symbols and traditions belong to all of humanity to use as we wish – to revere, or to ridicule. Letting extremists dictate who can talk about religion, and how, ultimately erodes everyone's freedom of religion, belief and expression.