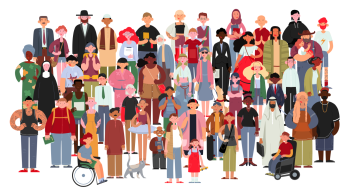 Following a call for a greater role for religion in public services, Stephen Evans argues that any expansion of faith-based provision mustn't see equality and fair treatment relegated to secondary or dispensable matters.

The recommendation came in a report from Conservative MP Danny Kruger, commissioned by the PM to review how the government can make the most of the voluntary sector in the UK's recovery from the coronavirus pandemic.

In Levelling up our communities, Kruger calls for a new era of 'community power' and says the government should "invite the country's faith leaders to make a grand offer of help", in exchange for a "reciprocal commitment from the state".

If you're wondering what that "reciprocal commitment" might be, Kruger has previously said it would consist of "a direction, from the very top, to all public servants to facilitate the work of the faith group on the agreed mission or missions".

Voluntary action can have a significant role as Britain bounces back from the pandemic. Civil society groups ­– religious and secular – should be supported and empowered to play their part. But state support for voluntary services needs to be contingent on certain standards being met. And Kruger suggests religious groups should be subject to a "light-touch" approval process, saying that many "do not wish to be entangled in the procedures and restrictions of the state".

I'm sure they don't, but where the "procedures and restrictions of the state" are intended to protect the rights and dignity of often vulnerable service users, they shouldn't be casually disregarded.

At the forefront of many concerns about faith-based public service and welfare provision is proselytism – attempts by those of faith to convert people to their belief, particularly in the context of working with vulnerable people who may be easily influenced.

Kruger dismisses such concerns as "faith illiteracy" and even "faith phobia".

However, research carried out by New Philanthropy Capital suggests such concerns are legitimate. NPC found that around a half of Christian charities in Britain agreed with the statement: "Through our activities we aim to increase the number of people who share our faith".

Some may argue that this manifests itself, not through 'proselytism' as such, but through the 'sharing of faith' to 'increase understanding' or 'help beneficiaries with spiritual needs'. But to those in receipt of services this often amounts to the same unwanted and inappropriate intrusion.

Just take state education, for example. This is a key public service in which religious organisations play a significant role. Despite faith schools being funded by the state, the education they provide is heavily infused with faith promotion and proselytism to a captive audience of children. Any attempt to address this is fiercely resisted.

It's a similar story in other sectors where faith-based provision is prevalent. Christians Against Poverty (CAP) is a major provider of debt counselling – and uses that opportunity to bring the people it advises to Jesus. It's an approach that led AdviceUK, the national body which represents the interests of advice-providing organisations, to terminate its membership. It considered the "emotional fee" of the offer or expectation of prayer whilst offering debt advice to fall below the ethical standards expected of service providers.

Despite his laissez-faire approach to proselytism, Kruger paradoxically suggests that an existing 'Faith Covenant', which sets out principles of cooperation between faith groups and local authorities, might make a good basis for the practicalities of his "new deal with faith communities". One wonders whether he has read it, because it wisely insists that faith-based organisations should deliver services to the public "without proselytising".

But as far as Kruger is concerned, those of a more secular persuasion are just as bad when it comes to proselytising. "Secular public servants wish that everyone thought like they did", he claims. He goes on:

"The fact that most religious people wish the whole world to agree with them does not mark them as different from secular liberals, who also wish their theology to be universal."

This is a somewhat spurious attempt to conflate the desire to evangelise with a desire to ensure public services are delivered in accordance with basic standards of equality and human rights.

Kruger is himself an evangelical Christian who used his maiden speech to call for the UK to 'return' to Christian values. Anti-secular rhetoric peppers the report and ultimately undermines it.

Kruger argues that through their "values" and "concern for the spiritual wellbeing of individuals and society", religious people are blessed with a "motivation and commitment that often exceeds that of paid professionals".

In so enthusiastically pushing his own pro-faith bias, he does a great disservice to the many thousands of nonreligious public servants in the state and voluntary sector who are equally motivated by their values in what they do and how they work.

The continuing drift away from Christianity (just 1% of young people say they belong to the Church of England), the growth of atheism and increasing diversity mean the most appropriate context for welfare provision in modern Britain is secular.

Many people in need of welfare assistance and public services are already put off by the stigma of the handout. Faith-based provision risks adding further stigma and barriers, particularly where it requires acquiescence to religious preaching.

Public servants are therefore right to take reasonable steps to ensure that the religious groups they partner with deliver their services in a professional manner without imposing their beliefs.

Some conservatives may yearn for a return to the Victorian model of the church and rich people doling assistance to the humble but grateful. But most of us will not be well served by faith-based welfare replacing a shrinking welfare state.

That's not to say there shouldn't be faith-based participation in public services. Religious groups have a long track record of providing welfare and have played a prominent role in the development of the modern welfare state.

Both faith-based and secular civil society organisations can play a part in our country's response to the Covid-19 crisis. Churches looking for a new purpose in an increasingly secular society may be tempted to step in to try and fix social problems exacerbated by spending cuts. But we should be wary of the possibility they'll regard it as an opportunity to evangelise.

Where religious organisations join others in delivering public services, we should expect them to respect boundaries and refrain from proselytising or discriminating against service users or their employees.

For many faith-based organisations, that's not too much to ask. And as we enter a new era of significant social challenges, we must ensure that equality of welfare provision, human dignity and fair treatment are not relegated to secondary or dispensable matters.