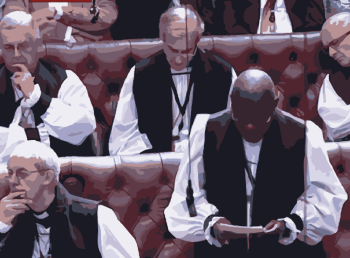 This week, in an article headlined "Peerage snub for top black bishop", the Sunday Times claimed that Downing Street had delivered an "extraordinary snub to Britain's first black archbishop by failing to award him an automatic life peerage".

The article claimed that as a retiring archbishop of York, John Sentamu should have been given a life peerage to enable him to continue sitting in the House of Lords in a personal capacity after his retirement in June.

The article pointed out that in failing to make the award to Sentamu, Downing Street broke with longstanding precedent by which retiring archbishops of York and retiring archbishops of Canterbury are made life peers on retirement. It also suggested there might be a racial aspect to the decision, although there have also been other, conflicting, suggestions that Sentamu has been promised the peerage, but has been told to wait a few months as Downing Street considers that the House of Lords is currently too large.

Let me be clear: any decision not to award Sentamu a peerage on the basis of his race would be totally wrong and unacceptable. However, it appears that there might have been something of a rush to judgement in this case. As the blogger Archbishop Cranmer pointed out yesterday, there are serious concerns regarding Sentamu's past actions in relation to safeguarding: concerns which could legitimately lead to the denial of a peerage, or at a minimum require that any decision is delayed pending full investigation.

Cranmer set out some of the detail. Amongst other things Sentamu stands accused of failing to respond properly to a report of clerical sex abuse by survivor Matthew Ineson. Ineson was repeatedly raped by a clergyman when he was a vulnerable and homeless 16-year-old. Ineson reported this to other bishops, including Stephen Croft, but no action was taken. So he went to Sentamu, who effectively said: "Not my problem". When confronted at the Independent Inquiry into Child Sexual Abuse with the evidence of his gross mishandling of Ineson's complaint, Sentamu declined to offer any apology to Ineson, who was sitting in the hearing room with him.

This brief summary barely does justice to what happened to Ineson; you can read more about his damning testimony, and the church's disgracefully "shabby and shambolic" response, here. It also seems that contrary to national policy, Sentamu fast-tracked his wife's ordination before she had completed her safeguarding training. There are other ongoing investigations, including an independent review of the York diocese's safeguarding on Sentamu's watch, which may yield other material relevant to Sentamu's suitability for a peerage. And as Cranmer observed this week, perhaps, in the light of the damning recent report from IICSA on the C of E's handling of abuse, "it might be a little unseemly to rush to ennoble any member of the clergy, let alone an archbishop".

These are very serious issues. Along with a number of abuse survivors and those who work with them, I have written to the House of Lords appointments commission to ask it to investigate Sentamu's safeguarding record as part of the process of vetting him for a peerage. But because of the secrecy which surrounds the appointments process, we will never know to what extent these issues will be investigated, and we have no idea whether the fact Sentamu has not been given a peerage at this stage is a product of racism, laziness or justified concerns about his record on safeguarding. However, the issues raised by this controversy go well beyond John Sentamu himself. They raise much bigger questions about the Church of England's privileged constitutional status.

First, let's consider the custom of awarding automatic life peerages on retirement. Because Britain has an unwritten constitution, there is no rulebook or statute we can consult to identify who gets an automatic life peerage on retirement. But as Wikipedia puts it, this generally happens to those retiring from "important public offices, such as prime minister, speaker of the House of Commons, or archbishop of Canterbury or York".

However, when you stand back and reflect on it, the suggestion that the archbishop of York or Canterbury is an office comparable in importance to the prime minister is self-evidently absurd. The proportion of the UK population self-identifying as Christian has substantially declined to less than half – and is now exceeded by the proportion identifying as having no religion. The suggestion that a retiring archbishop is an important public official may have been arguable 100 years ago; today, with long term religious decline and increased pluralism of belief, it is completely untenable.

Personally, I favour a fully elected upper chamber. But given the technical complexity of many of the issues now facing us – pandemics, climate change, food security, poverty, terrorism to name just a few – I can see an argument for reserving space in the legislature for those who have outstanding expertise in relevant areas.

Yet despite their outstanding intellectual distinction, and the expertise they could bring to parliamentary proceedings, retiring presidents of the Royal Society or the British Academy are not automatically granted life peerages, and a majority have not been awarded peerages at all. Since 2000 some 34 British citizens have won the Nobel Prize: 28 in sciences, three in economics and three in literature. None as far as I can see have been awarded a life peerage. Of the 16 individuals who have served as chief medical officer for England since the post was created in 1855, none has been made a life peer on retirement. Of the 13 individuals who have served as government chief scientific adviser since the post was created in 1964, only two have received life peerages.

Are we really saying that an archbishop of a declining church – a church riven with obscure obsessions about the status of women and homosexuality, and now fending off child abuse scandals on a vast scale – has more justification for an automatic life peerage than any of the above? The automatic award of a life peerage to a retiring archbishop of York (or Canterbury for that matter) is a ludicrous anachronism. It relies on a long defunct notion that the Church of England plays a role in our national life which makes it deserving of special treatment, and is completely outdated. It's also created such absurdities as George Carey, who was the subject of a damning IICSA report last year over his failures to report evidence of child abuse to the police, enjoying a lifetime seat in the legislature.

Of course, the issue does not end there. Before his retirement Sentamu was one of the 26 serving Church of England bishops who sit in the House of Lords as of right as 'lords spiritual'. In this respect, the Church of England enjoys a unique and completely unjustified constitutional privilege. Only two countries in the world have clerical representation as of right in the national legislature: Britain and Iran. Sharing a constitutional arrangement with a theocracy ought to ring alarm bells for us. As I argued here, this privileging of the Church of England is completely unsustainable.

Lest I be misrepresented, I have no objection to any member of the clergy seeking to stand for political office, and be elected in his or her own right: despite being a non-believer, there are individual members of the clergy I would happily vote into our legislature if they stood as candidates on their own merits. But members of the clergy should not be given this role automatically, when nobody voted for them, most of the population has no attachment to the institution to which they belong, and that institution is increasingly discredited.

To my Anglican friends I would also add: in the long run your church would benefit from disestablishment. Constitutional privileges have made the Church of England lazy and entitled, and fostered a belief amongst some of its leaders that they are above the law (as Carey's behaviour showed).

This culture of entitlement has not served the Church of England well, as its abuse scandals and rapidly declining congregations testify. My late friend and radical Anglican priest the Rev Ken Leech put it thus: "If the Anglican presence is sustained only by a legal structure, is it worth anything?... As it stands the Church of England is a captivated and compromised church, a church in bondage to Babylon". Its leaders, said Leech, "bear the mark of the beast...For the church to hide behind the structures of Caesar is a betrayal of the gospel".

But, Leech argued, "were it to be disestablished, the Church of England might well lose some of its more expensive buildings and much of its status, but what it might gain in credibility is enormous".

I agree. The church now faces an existential choice. It can cling to the decaying relics of theocracy, including automatic peerages, or it can choose the path of honesty and renewal as a church that stands on its own two feet, and on its own merits.

In truth, only the C of E's increasing irrelevance protects it from public pressure to abolish these outdated and undemocratic arrangements. But the controversy over Sentamu brings them back into the spotlight, and reminds us that it's time to bring the Church of England's unearned and unjustified constitutional privileges to an end.