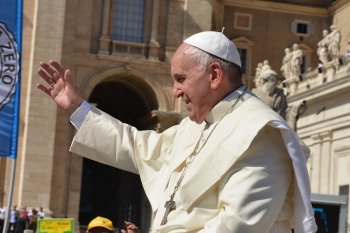 Some welcomed his statement. Marianne Duddy-Burke, executive director of DignityUSA which represents gay Catholics, said the comments "could represent an international game-changer and a major step forward for LGBTQI equality". James Martin, a Jesuit priest with an active ministry for LGBT+ people, called the remarks "historic" and "momentous".

The remarks also attracted criticism and back-peddling from conservative quarters of the Catholic Church. American cardinal Raymond Burke said the comments "generate great bewilderment and cause confusion and error among Catholic faithful" and that they should be "interpreted as simple private opinions of the person who made them".

And many more were quick to point out that the pope's statement does little to promote LGBT+ rights. The pope has made no indication that he's changed his view that marriage is exclusively for opposite-sex couples, and that gay people should live a life of celibacy. He's even stated that parents who notice their children exhibiting "strange symptoms", i.e. same-sex attraction, should go to a psychiatrist. This isn't far from outright endorsing so-called 'conversion therapy'.

But why should the internal policies of the Catholic Church be of such immense interest to the international press and to non-Catholics?

It's because the Catholic Church's policies resonate far beyond its own congregation. Because the church wields disproportionate power over law and policy-making in countries throughout the world, we are all – regardless of religion or belief – potentially affected by whatever its leaders say.

One only need look at what's happening in Poland right now for evidence of this. Thousands of protestors have taken to the streets in the wake of a ruling last week that amounts to an almost total ban on abortion. Many of the protests have targeted churches, as activists claim Poland's ruling party has pressed the court to tighten restrictions in order to please the influential Catholic Church. One protestor stated: "Our rage should be directed towards politicians, but also towards senior church figures as they have also added to this women's hell that the authorities are preparing."

Another said: "I'm here today because it annoys me that in a secular country the church decides for me what rights I have, what I can do and what I'm not allowed to do."

But what about the UK? Although Catholicism is a minority religion here, Catholic policies have considerable impact on our state education.

In 2018, National Secular Society research found examples of state-funded Catholic schools' policies that said same-sex relationships are "unacceptable", "morally wrong" and "against the natural order" and same-sex attraction is "disordered". It also found many Catholic schools teaching that marriage between a man and a woman is the only 'valid' relationship. One school said "treating alternative relationships as equivalent to marriage" was "contrary to the school's ethos".

There were also many policies explicitly condemning not only abortion, but also all forms of contraception besides the pope-approved – yet ineffective – 'rhythm method'.

In this way, the Catholic Church uses state funding to promote its anti-LGBT+ and anti-family planning agenda, and inculcate generations of children with the view that same-sex relationships and women who control their own reproduction are shameful and wrong. And as long as the church remains embedded in the state school system, its teachings will continue to shape education policy at state schools – and the opinions of our future leaders, educators and policy-makers.

The church's lobbying can even impact those who don't go to Catholic schools. In June, a coalition of Welsh Catholic school headteachers wrote to the first minister asking him to resist changes to religious education to make it more pluralistic. And the Catholic Church was, unsurprisingly, one of a number of religious institutions that supported the 'Section 28' policy, thankfully now repealed, that prohibited "promoting homosexuality" in all state schools.

The Catholic Church has imposed its views on non-Catholics in other areas of public life too. Healthcare policies regarding the use of the contraceptive pill that were introduced in order to try and accommodate Catholic teachings were only revoked last year. The church has continued to throw its weight against abortion, even pressing the attorney general to appeal a 2015 High Court ruling that allowed abortion in cases of incest, rape or fatal foetal abnormalities in Northern Ireland in 2016. And its privileged position has given the church a disproportionately large platform on which to lobby against assisted dying.

Like any other religious institution, the Catholic Church should be free to determine its policies. And everyone else should be free to ignore them. But while governments continue to accommodate religious demands, our basic human rights – including women's rights to bodily autonomy and LGBT+ people's rights to equal treatment – lie at the mercy of the whims of religious leaders. That's why governments need to resist attempts by religious institutions to force their hand, and stand up for liberal, secular, democratic principles prioritising individual rights over theological dogma.

Image by Annett_Klingner from Pixabay.