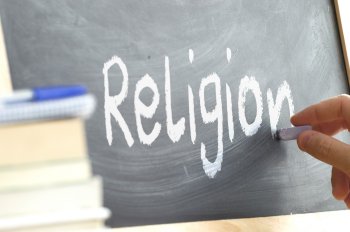 Compulsory Religious Education in schools is a bit of an anachronism. The purpose of bringing in a requirement for religious instruction back in 1944 was to inculcate pupils with Christian dogma. The original doctrinal basis for the subject hasn't been tenable for decades, so its enthusiasts have had to constantly reinvent a rationale for it.

But none of these justifications adequately account for the privileged educational position still granted to theistic views in British schools.

The sort of religious education pupils receive in schools today varies greatly. But thanks to the lingering influence of religious groups over state education, RE has remained mandatory for all state-funded schools, at all key stages, for pupils from the ages of five to 16.

Now, one part of the UK (education is a devolved matter) has had the sense to have a bit of a rethink. The Welsh government has published legislative proposals to rename the subject 'Religion, Values and Ethics'. It signifies a shift towards a more pluralistic and balanced approach than previously seen. Amendments to existing legislation will make it explicit that any agreed syllabus for RVE must reflect both religious beliefs and also non-religious beliefs. A long overdue development.

One of the general principles of the European Court of Human Rights is that states must take care that the curriculum in schools is delivered in an objective, critical and pluralistic manner. Religious privilege has always prevented this from being anywhere near fully realised in the UK.

The Welsh government considered imposing a new obligation on all schools to teach RE in a pluralistic manner. However, in the face of religious lobbying the minister decided against it, citing the "significant implications" it would have for faith schools. Faith schools of course demand the right to teach their own confessional version of the subject — which promotes a particular religious worldview, and so is more akin to indoctrination than education.

But shouldn't every child have an equal entitlement to a broad and balanced curriculum? Setting out her vision for religious education reform last year, Kirsty Williams said she wanted a "fully inclusive education system" where "all learners have the equity of access to education". Under these plans, children's rights to impartial education will depend on the whims of what parents decide to do or not to do. That is surely an indefensible position. Clearly these reforms, stymied as they have been by religious interests, fall substantially short of their own ambitions.

It's also difficult to see how, in practice, faith schools will run two RVE curricula in parallel. Parents are unlikely to want to rock the boat by requesting the alternative curriculum, and teachers will need substantial extra resources to teach both courses effectively. A biased and confessional approach to RVE will still dominate in many faith-based schools but now with the added downside of segregating pupils along religious lines. One wonders what message about religion this will send to young people.

Another missed opportunity is the decision to retain a role for SACREs. These are local committees dominated by religious interests that are responsible for developing and adopting an agreed RVE syllabus.

Mark Chater, the former Director of Culham St Gabriel's, a trust supporting research, development and innovation in religious education, recently noted that RE will only be recognised as critical, objective and pluralistic when it is "liberated from any influence of any belief groups, whether religious or secular".

These proposals manifestly fail to do that. SACREs and faith schools will allow vested interests to continue to exert significant influence over RVE, undermining its legitimacy across all schools.

And this is particularly alarming because the proposals also end the parental right of withdrawal, a vital religious freedom protection that has existed since the study of religion became compulsory in schools in 1944. Ending this right under such circumstances is clearly premature.

The Welsh government would perhaps have been better taking a more radical approach and dispensing with RE altogether. There is no compelling reason why a stand-alone subject primarily devoted to the study of religion should be part of the compulsory curriculum in modern Britain.

In a world in which religion remains highly relevant, a rounded intercultural education that helps students to navigate issues of religion and belief is clearly beneficial. But the in-depth study of particular religions is a parental or individual responsibility. It's not the role of the state.

All those hours spent theologising and learning about gods and goddesses prevents more beneficial learning from taking place. The useful stuff covered in RE could quite easily be absorbed into a wider humanities subject. Citizenship, human rights, moral philosophy, cultural and political literacy will arguably be of more practical use to future citizens and wider society than theology. Opportunities naturally arise for religion to be explored in other subjects, too, such as English literature, history, and the visual arts.

The Welsh government could lead the way, here. But it seems churches are still wielding significant influence over education policy. This is both outdated and educationally inappropriate. Wales, which has a disestablished church, presents the ideal opportunity to genuinely transform the way we approach religion in schools. But that opportunity will be wasted unless legislators learn to prioritise young people's interests above those of organised religion.

This piece was originally published on Medium.