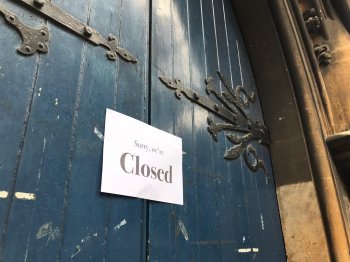 This Sunday, as the eye of the coronavirus pandemic came looming into view, a pastor in Louisiana claimed an attendance of 1,265 at his church. He's since continued to hold packed services, and claims "the constitutional right to congregate" defends them.

In Israel, the virus is spreading faster in ultra-Orthodox Jewish enclaves, where some rabbis were slower to close large gatherings, than in more secular areas. Most ultra-Orthodox synagogues in Israel are now closed but some sects are continuing to defy restrictions on large gatherings and refusing to engage in social distancing.

In the virus hotspot of New York in mid-March, as the authorities banned gatherings of more than 50 people, large Chasidic Jewish weddings continued to take place.

Pakistan has tried to limit the number of people at prayers to five in recent days, but compliance has been patchy. Last Friday a crowd of 400 gathered at one mosque in Karachi. Large religious events in Pakistan and Malaysia in the preceding weeks have been identified as sources of large numbers of infection.

And as Borzou Daragahi pointed out in The Independent this week, this problem doesn't just relate to the Abrahamic faiths. In India, for instance, health officials think a Sikh religious leader may have given the virus to up to 15,000 people. He ignored advice to self-isolate after returning from Italy, instead visiting 15 villages on a preaching tour.

So across much of the world, religious fanaticism of various stripes is undermining the effort to stop the coronavirus outbreak.

And it's not just making it harder to prevent gatherings of people. In some cases it's encouraging very risky rituals. In Romania and Georgia, some priests have insisted on continuing to use a shared spoon during communion. Georgia's Orthodox Christian church has claimed it's not possible to get sick from communion because it's a religious ritual. In Iran, a group of men filmed themselves licking the coverings which encase the tombs of Shia Muslim saints.

Some of these fanatics are obstinate; some are deluded or exploitative. Consider the US preachers who have minimised the threat posed by coronavirus on religious grounds or encouraged followers to focus on spiritual preparation rather than protecting their health.

But this has also highlighted a lack of awareness of the outside world in some insular religious communities, which is hindering the spread of accurate information. Deciding not to own a TV or smartphone, for instance, are legitimate lifestyle choices – but they act as distinct disadvantages in times like this. Suspicion of the secular authorities, which is often encouraged by religious leaders to protect their own power, is also unlikely to be helpful in a crisis.

At a time of such dramatic and unsettling change, it's not surprising to find some religious fanatics refusing to play ball, or just unaware of the importance of listening to health advice. And in time, as the reality of the threat has become apparent, much of the religious resistance – like the resistance that exists in some secular settings – has drifted away. The Russian Orthodox Church initially insisted it would only restrict activity if the Kremlin ordered it to do so; it's since advised worshippers not to visit churches. Some US preachers who initially decided not to cancel meetings and events have since moved them online.

But more alarmingly some politicians have indulged religious exceptionalism in the face of the virus. In the US state authorities in Michigan, Kansas and New Mexico have created religious exemptions to bans on public gatherings. Ohio's governor has publicly advised religious groups not to gather, but has also exempted religious institutions from a stay-at-home order. President Trump has said he wanted to see "packed churches" on Easter Sunday, before backtracking.

Iran, where the theocratic regime is reliant on the support of Islamic hardliners, has been slow to restrict activity at mosques and shrines. Brazil's president Jair Bolsonaro at first gave special treatment to religious services before a court suspended his decree.

What of the UK? A handful of synagogues and mosques remained open in the final few days before the government introduced its lockdown on 23 March. There have been stories of the police being called to break up prayer meetings since then (along with untrue and counter-productive stories of mosques remaining open after the lockdown). Some Orthodox Jewish groups are continuing to carry out circumcisions, albeit with reduced attendance. At least one religious minister has used the opportunity to sell 'plague protection kits' made of oil and string – a point the NSS has raised with the Charity Commission, which has since decided to investigate.

But these stories have been relatively isolated. On the whole we've been more fortunate. The government confirmed that its social distancing guidance applied to religious gatherings, just like secular ones, in mid-March. And groups including the Church of England, the Muslim Council of Britain and the Board of Deputies of British Jews responded helpfully. Places of worship have been closed on a widespread scale with minimal opposition.

In some cases religious groups' cultural norms and expectations are making it harder to uphold social distancing. But some community groups have acknowledged this and are encouraging their followers to follow public health advice.

And where there is pressure to relax the rules to accommodate religious sensitivities, it's not being accommodated. In Birmingham some large religious funerals are continuing to take place. But the local council has rejected a call to increase the number of people allowed to attend, despite a request on behalf of Muslims in the area.

With the stakes as high as they are, there's general agreement that religious freedom should be treated as a qualified right, rather than an absolute one. And the British people's relatively secular attitudes and laws are assets which help us to uphold that principle.

Politicians know they can restrict religious gatherings for the protection of public health; Article 9 of the Human Rights Act explicitly says so. Religious groups can speak for themselves, but outside observers can fairly note the influence of benign external pressures on them. They have more reason to think unhelpful claims to exceptional treatment will go down badly. And they have more incentive to focus instead on sending a positive message, about the good work many of their followers are doing in the face of the crisis.

The mainstream consensus over the boundaries of religious freedom may only be temporary. But when the stakes are this high, for now we should be grateful that places of worship are being treated equally to football stadiums, pubs and theatres.