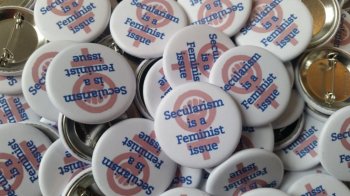 It is no coincidence that one of the first leading members of the National Secular Society was also a leading women's rights advocate, Annie Besant. She was involved with the suffragettes, the 1888 'Matchgirls' Strike' against appalling working conditions experienced by women in match factories, and regularly spoke out for women's equality. She and NSS founder Charles Bradlaugh were put on trial for publishing a book on birth control that greatly offended the Church of England.

It is also no coincidence that many other pioneers of secularism in the UK spoke out for women's rights. Richard Carlile, the first person to establish a permanent secularist campaigning organisation in the UK, argued that "equality between the sexes" should be the objective of all reformers. In 1826 he published Every Woman's Book, which advocated birth control and the sexual emancipation of women. And it is no coincidence that today, women's equality is still a priority for secularists.

Secularists campaign for separation of religion from state, and equality for all in society regardless of religion or belief – or, of course, sex. Secularists recognise that religion has long been a major contributor to female subjugation. When states reject democracy and embrace theocracy, women are among the first to suffer.

Patriarchal religious institutions try to maintain the status quo by exerting control over women's bodies. The denial of a woman's right to make decisions about family planning is one of the most common forms of this control, through the prohibition of contraception and abortion. Sadly, the right to a safe and legal abortion is slipping away in the US, a country where the constitutional separation of religion and state is under attack by the Christian right. Female genital mutilation, taboos around menstruation and 'modesty culture' (in which women are always required to cover more of their bodies than men) are other examples of patriarchal control over women's bodies that is endorsed and supported by religion.

Religious institutions also extend their control to women's place in society. Fundamentalist religious laws invariably grant men a higher status in society than women. Thus we see religions complicit in denying women around the world authority roles, employment, political participation, educational opportunities, equality in marriage and access to fair justice. Women who belong to marginalised groups, such as women from minority communities or LGBT+ women, often suffer the most from religious oppression.

These inequalities are frequently difficult to tackle because many people are afraid to criticise religion. Those who speak out against harmful religious ideologies and practices, even those raised within religious communities who have been directly affected, find themselves labelled 'intolerant' or 'bigoted' when they speak out. Even some politicians and activists who pride themselves on promoting progressive, liberal values are silent on religion's contribution to women's inequality, and may deny religion plays any role at all.

Freedom of religion is a qualified right, and it cannot be allowed to trump other basic human rights. It is the goal of secularists to challenge all forms of religious privilege, and to ensure everyone can live equally, fairly and with dignity in society. That's why I encourage all feminists to follow in the footsteps of Besant, Carlile and other historical secularists, and to join in the campaign for a society that's fair for all – religious and non-religious, LGBT+ and heterosexual, women and men.

This is a lightly edited version of a piece originally written for the FiLiA 2019 magazine which will be distributed at the FiLiA conference. It's reproduced here with kind permission.

Yasmin Rehman was among campaigners who recently met Ofsted's chief inspector to discuss veiling in schools. Now, she writes, some powerful Muslims are making sinister efforts to silence her and her fellow...