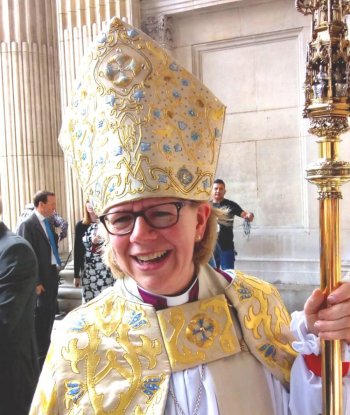 The bishop of London has lamented the state of British democracy while delivering a sermon at the annual judges' service. Perhaps someone should point out the undemocratic nature of her own position, says Chris Sloggett.

On Tuesday the bishop of London, Sarah Mullally, delivered the sermon at the annual judges' service at Westminster Abbey.

During the service, which marks the start of the legal year, judges pray for guidance and sing hymns. Those responsible for upholding the law – and the government minister responsible for introducing it, the lord chancellor – take time away from their usual duties to bend the knee to the established church. And this all happens while they're on duty and being paid by the taxpayer.

The service both embodies and deepens the Church of England's exclusionary relationship with those who wield power in Britain. So it was quite something to hear that Mullally had used her sermon to lament the state of British democracy.

Addressing the current impasse over Brexit, she said we were "arguably" at a "low point" democratically and at a moment "filled with chaos and confusion". Perhaps, at this point, someone could have reminded her of the undemocratic nature of her own position.

Mullally is one of 26 bishops who sit, unelected and unaccountable, as representatives of the state church in our legislature. And during her sermon she took the opportunity to push her political and religious opinions on members of the judiciary – an institution which must, in a healthy democracy, remain rigorously neutral.

She casually advanced her view, or her interpretation of the biblical view, of the government's policies on prisons and the police. She also used the chance to promote Christianity, as she made contentious arguments about the relationship between the "biblical tradition" and the rule of law. Suffice to say, by virtue of her religious position, Mullally enjoys opportunities to influence public debate and public policy which aren't open to ordinary folk.

The Church of England now regularly weighs in to Brexit-related debates. Last week, for instance, all 118 of its bishops and archbishops issued a statement rebuking MPs for their language and calling for "a cooling of tempers on all sides".

Perhaps you think we shouldn't restrict the language politicians use to debate important issues. Or perhaps you think there isn't an equivalent problem with hot tempers on "all sides". Either way, you're unlikely to be able to respond on equivalent terms. The bishops' views are heard in the House of Lords and given plenty of weight in the press. If you're reading one of my blogs, yours probably aren't.

With Brexit so dominant within our politics, some will be tempted to welcome the bishops' interventions when they advance opinions that they like. In August a group of MPs even invited the archbishop of Canterbury to chair a 'citizens' forum' on Brexit.

But they should be careful what they wish for. One moment the bishops may argue that the government's attempts to leave the EU are too reckless; the next they might tell those who oppose Brexit to "stop whingeing".

And that's before we ask whether they have anything substantial to say. When Justin Welby says Britons should unite behind a "vision for this country that is outward-looking, is done top-down, middle-out, and bottom-up", how far has he really advanced public debate?

The C of E's bishops are entitled to their views. But they shouldn't be entitled to express them unchallenged in powerful circles simply because they enjoy senior ranks in a religious institution. The health of British democracy would be greatly improved if we required them to earn the right to be heard in public debate on the same terms as other citizens.