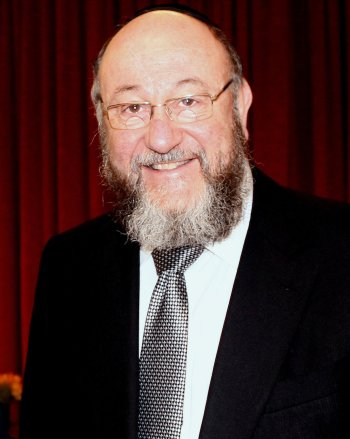 The chief rabbi has asked secularists to stop campaigning against practices such as faith schools and infant circumcision. His apparently polite request should be firmly rejected, says Chris Sloggett.

The chief rabbi, Ephraim Mirvis, has used a speech to an interfaith conference to claim "Humanism" is becoming "ever-more combative in the way in which it regards faith communities".

His soft and carefully worded address was not so much an attack as a lament. Jewish tradition, he said, drew heavily on humanist principles (with a lower-case 'h'). So what a shame that "Humanists" (upper case 'H') and other secularists - presumably meaning the National Secular Society, given the name-check he gave us - made arguments which the rabbi did not like.

Mirvis highlighted campaigns against two religious privileges in particular: faith schools and ritual infant genital cutting. And it's firstly worth noting how thin his arguments in favour of these practices were.

He claimed those who campaign against faith schools were "in effect campaigning against my freedom to raise my children in accordance with the tenets of my faith". This only holds true if you think that freedom extends to expecting the state – funded by taxpayers from all religious backgrounds and none – to provide support for those schools. The rabbi's line suggests there are credible campaigns to stop religious people from being allowed to take their children to synagogues, churches or mosques in their free time. It hardly needs saying that this isn't the case.

On circumcision, Mirvis noted comments made by NSS chief executive Stephen Evans. He quoted Stephen saying: "The demand for religious freedom to be respected is often little more than a demand for the state to turn a blind eye to the violation of other's rights and freedoms when done in the name of religion." (Readers can make up their own minds over whether Stephen has a point.)

He then said circumcision was "an essential part of our existence" for Jewish men and claimed: "An attack against our right to perform circumcision is an attack against a most fundamental element of our belief." But this suggests the boy being circumcised is also the one practising the belief – rather than a child having someone else's religion irreversibly and painfully imposed on him.

Nor did the rabbi engage with reasonable criticisms of the practices he defended. Consider the case against faith schools: the state shouldn't endorse the idea that religion is inherently worthy of respect; children shouldn't be encouraged to identify themselves with religious labels; society shouldn't be segregated between different religious groups. Mirvis didn't respond to any of these points. And on circumcision, he didn't acknowledge that his logic could be used to defend any abusive practice – most obviously female genital mutilation.

Instead he simply decried the fact that people made these points at all. And this is where his remarks become alarmingly anti-democratic.

Amid his religious allegories, references to "Humanist friends" and flowery metaphors about cricket (we should all be batsmen rather than bowlers, apparently) and symphony orchestras (we are best off playing instruments "together under the baton of respectful cooperation") came the following passage:

"If it is freedom you seek, please do not campaign against our freedom to practice our faith. If you are calling for tolerance, please do not stoop to intolerance of faith communities and religious practice. If you wish to prevent religion from imposing its values on our society, please don't do just that, by seeking to impose Humanism on our society."

This roughly means "shut up". Or perhaps "please shut up". But either way, the effect is the same.

The request not to campaign against "our freedom to practice our faith" effectively asks people not to highlight abusive religious practices or work to end them. The insinuation that criticism of religious groups is "intolerance" is a well-worn reflex which reveals that the speaker cannot win the argument without resorting to illegitimate attacks on those raising reasonable points. And the claim that there is an attempt to "impose Humanism" is a mischaracterisation of efforts to defend the principle that there should be one law for all.

The attitude the rabbi articulated poses a threat to values which citizens of enlightened societies should hold dear. And his diplomatic pleasantries shouldn't blind us to that. Religious groups have long sought to shut down debate about their practices and beliefs. When they've failed to win arguments, they've resorted to silencing tactics. And human flourishing has long depended on people being willing to defy them.

If the chief rabbi's words are taken seriously, it will become harder to criticise and end religious practices such as infant genital cutting and faith based schooling. If we care about freedom of thought, individual rights and social cohesion, we should instead try to make it easier. This apparently polite request should be firmly rejected.