Operation Christmas Child: Does its charity benefit the public? 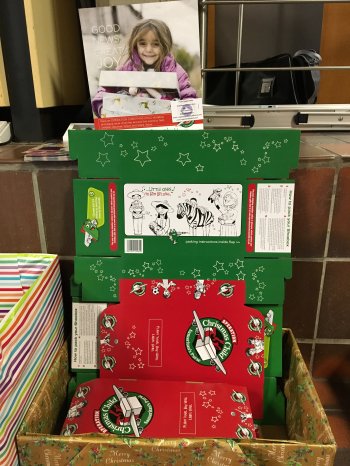 Samaritan's Purse is again launching its Christmas shoebox scheme in parts of the UK. The harm done by Operation Christmas Child should prompt a rethink of this Evangelical group's charitable status, says Megan Manson.

For many people in the UK, including non-Christians, Christmas is a time for giving. Charity donations increase during the Christmas period, and charities understandably capitalise on this by launching special Christmas appeals.

One particularly ubiquitous appeal, which members of the public contact the National Secular Society about every year and has already launched in parts of the UK this month, is Operation Christmas Child.

Operation Christmas Child is a scheme run by an Evangelical Christian charity called Samaritan's Purse. It is a 'shoebox scheme' which many schools, youth groups, churches, councils and other organisations get involved with during the run up to Christmas. Donors fill shoeboxes with toys, which are then sent to children in developing countries as 'Christmas presents'. Schools and parents often see the scheme as an opportunity to teach children about the importance of helping those less well-off.

What many participants do not know about the scheme is that it aims to push fundamentalist Christianity on vulnerable children.

Once they arrive at their destination, the boxes are given to children at an "outreach event", together with conversion-focused Christian literature. The children are also encouraged to join a Christian indoctrination programme called "The Greatest Journey". It's important to note that countries with large Muslim populations are targeted in particular. This graphic from the Samaritan's Purse website reveals the charity's evangelising model:

The question we must ask is: what kind of public benefit does Samaritan's Purse serve?

To be a registered charity, an organisation must be able to demonstrate that it serves the public benefit, and it must not do more harm than good.

It's fairly easy to argue that Samaritan's Purse's flagship programme does in fact do more harm than good. Operation Christmas Child exploits children and families in developing countries by putting them under pressure to convert to fundamentalist religion. It's hard to say "no" to people who come bearing gifts, especially for one's children. It can be viewed as a soft form of Christian colonialism.

Referring to Operation Christmas Child, Brendan Paddy of Save the Children has said it is "dangerous when charities mix humanitarian work with the promotion of a particular religious or political agenda". He also says the appeal is "something that benefits the giver more than the receiver".

But does it even benefit the giver? Operation Christmas Child utilises the generosity of the general public as a tool for religious conversion. Many people take part because they genuinely think they're doing something to help less fortunate children. Once they discover how the shoeboxes are used, many participants are rightly horrified. They never wished to be used as the unwitting agent in religious propaganda.

Then there are other considerations. The environmental impact of flying tonnes of plastic toys across the world every year is surely significant. The scheme can also impact the local economy, where vendors trying to sell their own products must compete with free handouts. It may even cause conflict among recipients because the contents of each box differs; a key principle of aid is that it is distributed evenly.

While it may make the donor temporarily feel good, filling shoeboxes with plastic trinkets to send overseas is a highly inefficient way to give to charity. No major aid agency supports shoebox schemes, because money can be used far more effectively.

The Charity Commission, which regulates charities in England & Wales, has previously been told of concerns about Samaritan's Purse. As a result, a few aspects about Operation Christmas Child have changed. The charity is more upfront about its evangelising mission in its literature and on its website. It also no longer puts its conversion-oriented material within the box - instead workers hand out the books alongside the box, which is hardly better. The fundamentals of the charity have not changed at all: it continues to spend millions on flying boxes of toys around the world as part of a mission to convert communities en masse to Christianity, with no regard for any of the harms that may result.

There are many well-respected charities with a religious ethos that do help people without any sort of evangelical strings attached and follow third sector best practice. Those charities are to be applauded and supported. But charities like Samaritan's Purse that prioritise proselytising over people must be held to account.

Removing "the advancement of religion" from the list of charitable purposes would not affect those religious charities that are doing genuine, demonstrable work to benefit people, animals, the environment or society. But it would mean the charitable sector, and the public, would be protected from organisations like Samaritan's Purse, which seek to exploit charitable status to serve a religious agenda.

The NSS advises parents, schools and community groups to be fully informed about Operation Christmas Child before taking part. You can read more on our FAQs page.