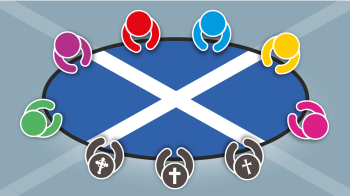 After a National Secular Society report called for an end to religious appointees on council education committees in Scotland, Neil Barber says it's long past time for these positions to go.

In days of yore the rich churches used to run lots of public institutions. One of the atavistic hangovers from that time is that all council education committees in Scotland are statutorily obliged to allow three unelected religious appointees – one Catholic, one Protestant and one other – to sit at the table. Some councils even have four.

This was a little known religious privilege for decades until the growth of secular consciousness in Scotland which is now shining a light on the issue.

A few months ago an unpopular move to close Blairingone Primary, a small school in Perth & Kinross, was swung by the votes of two religious representatives. The resulting upset revealed that it is in the gift of every council, while they must still have religious appointees in the room, at least to remove their voting privileges. This move is now being considered by many councils throughout Scotland. It is peculiar that this specific example has flagged up a problem which secularists have opposed on principle for years.

The response of the Catholic Church is apoplectic. Leo Cushley, the archbishop of St Andrews & Edinburgh, requested his letter of indignation be read out from every pulpit in the land. This, he warned, was a slippery slope towards the total abolition of Catholic schools. Sadly, such is the continued power of sectarian division in Scotland – and memories of genuine discrimination generations ago – that any whisper of confronting the Catholic Church is an absolute no go area for elected officials wanting to maintain their block vote.

About 100 years ago the state took over running all schools. The negotiations at the time conceded an element of continued control to the churches. But churches have not owned our schools for over a century. Their continued powers in education are tantamount to selling a house but retaining a back door key. We should remember that religious control over education in Scotland dates back to a time when it was a criminal offence to be drunk in charge of a cow.

The presence of religious reps is increasingly out of touch with Scottish people's views on religion. Religious believers now account for fewer than half of all Scots, and Christianity is a further subset of that minority. Numbers plunge even further amongst the young.

Catholic leaders argue that as long as there are Catholic schools, they should sit on committees with a say over all schools. This is a ridiculous cyclical argument, amounting to: "We enjoy the privilege of taking taxpayers' money to run schools according to our own very special notions of science and morality, ergo it's only fair that we have this further privilege of guaranteed seats on education committees."

The existence of denominational schools is in itself unjustifiable. Why belief in a supernatural being should equip someone to run a school is another debate to be had, but the lack of accountability for unelected representatives on education committees is clear.

Faith groups also argue that they bring a politically neutral wisdom to the table. This is an absurd idea. They lobby the government every day with their own ideologies: many even retain parliamentary liaison offices. In an annual report a few years ago, the Church of Scotland boasted that "these three church representatives hold the balance of power on 19 local authority committees". In some cases creationists have been appointed. Edinburgh Secular Society highlighted worrying examples of this, and of votes cast to maintain the sectarian segregation of children, in our campaign to remove religious reps in 2013.

Even just removing religious reps' voting privileges is proving very tough. Last Thursday The City of Edinburgh Council discussed it but put off its decision until November, pending a consultation with 'faith leaders'. Mmm… I wonder what they're going to say?

Some resort to hoping that religious representatives will only vote on matters directly related to faith. That didn't stop them with Blairingone Primary. And even without a vote, why should they have power to influence general policy? Councils can always consult religious leaders, just like anyone else they think worthwhile, on pertinent issues.

Now a National Secular Society report has made the case for ending religious appointees, and the argument is welcome. There is no reason at all that religious believers and institutions shouldn't have an opinion on school matters, but they are entirely free to promote these ideas without having their names engraved on political seats. They should stand for election on a religious ticket and I, for one, would fight for their right to do so.

There was a time in history when churches ran schools where rich boys were taught to read the Bible in Latin, but religious representatives have no special training as modern educators. At the risk of argumentum ad absurdum, why not allow representatives of football clubs to sit at the table?

It is an affront to democracy to hold voting rights when you are neither voted for, nor can you be voted off.