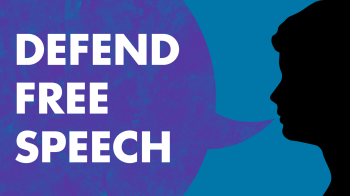 The disqualification of a GCSE student who criticised halal meat is a reminder of the need to resist censorious offence-taking on Islam and the normalisation of the idea of 'Islamophobia', says Stephen Evans.

A 16-year-old school pupil from East Sussex this week became the latest person to find themselves in the firing line for being less than reverential about Islam.

Responding to a question on a GCSE religious studies paper, Abigail Ward, who attends Gildredge House school in Eastbourne, opined that halal slaughter was "absolutely disgusting".

Anyone who has watched animals being ritually slaughtered while still conscious may be inclined to agree with her. Nevertheless, the exam board OCR disqualified Miss Ward from the exam, accusing her of making "obscene racial comments".

The decision was overturned following an appeal from the school which pointed out that the student had been expressing her distaste for halal slaughter methods and was not making any comment about Muslims.

Nevertheless, the whole episode speaks to a growing censorious culture around Islam. Anyone interested in preserving the right to free speech should be alarmed that a perfectly valid and widespread criticism of a controversial religious practice was deemed bigoted, racist and deserving of punishment. Abigail Ward joins a long list of people who have attracted accusations of 'Islamophobia' – and by implication 'racism' – for criticising Islamic ideas, or even failing to treat them with sufficient reverence. Although this student's disqualification was overturned, the original decision fed into the narrative that criticism of Islam is 'intolerant' and beyond the pale.

The urge to silence criticism of religion to avoid causing offence is often well-intentioned. Muslims living in Britain increasingly find themselves on the receiving end of hatred and abuse. Any decent person would want to alleviate that. But existing laws that protect us all from discrimination, harassment and violence apply equally to Muslims. The rights of all British Muslims to live their lives in peace absolutely need to be upheld and protected – but not at the expense of the right to freely express views and opinions.

Although blasphemy laws in England and Wales no longer exist, there is a growing unease that Islam enjoys some sort of special protection from criticism and mockery. Rising anti-Muslim bigotry coupled with the fragile sensibilities of religious fundamentalists have made commentary around Islam a treacherous minefield.

Islamic extremists have of course long tried to silence any criticism or mockery of their religion. The 2015 terror attack on the satirical magazine Charlie Hebdo was just one notable example of this. The assassination of Dutch film maker Theo van Gogh by a man acting "to defend the name of Allah" was another. Many others have been murdered for criticising Islam or 'insulting' the 'prophet'. Such crimes leave a damaging legacy of self-censorship motivated by fear.

The emergence of hate speech laws has also contributed to the chilling of debate. The Racial and Religious Hatred Act of 2006, which amended the Public Order Act of 1986, created various offences involving 'stirring up hatred' against persons on religious grounds.

To reach the legal threshold of stirring up of hatred on the basis of religion, the conduct must be threatening. Unlike race hate laws, being merely 'abusive' or 'insulting' is insufficient. An important protection for freedom of expression was written into the law to make clear that "discussion, criticism or expressions of antipathy, dislike, ridicule, insult or abuse of particular religions or the beliefs or practices of their adherents" was not prohibited by law.

Nevertheless, the introduction of religious hate crimes and 'incidents' appears to have created the impression in some minds that people have the right not to be offended or insulted. Despite the legal reality, mischievous activists and social media mobs still clamour for police intervention whenever someone is perceived to have been 'abusive' or 'insulting' about Islam.

Such was the clamour when Boris Johnson suggested that Muslim women who wear burkas look like bank robbers, the head of the Metropolitan Police felt the need to intervene to clarify that his comments, however offensive to some, did not reach the "bar" to be considered a hate crime.

The false perception that people have the right not be offended probably isn't helped by police forces regularly tweeting messages inviting the public to contact them with reports of 'non-crime incidents', where members of the public have felt offended.

The phenomenon of 'Islamophobia' becoming part of the political lexicon also poses a serious threat to free speech. The term, which erroneously conflates race and religion, has been promoted by an unlikely alliance of regressive Islamic activists and left-wing 'progressives' in the name of combating anti-Muslim bigotry. The recent attempt by the all-party parliamentary group on British Muslims to get Islamophobia officially defined as "a type of racism that targets expressions of Muslimness or perceived Muslimness" will only make matters worse.

A new 'Anthology of Concerns' over the APPG's Islamophobia definition published this week highlights the dangers posed to liberal values by attempts to promote this concept of Islamophobia. A disparate range of unlikely bedfellows, including the National Secular Society, Christian Concern, Richard Dawkins, the Network of Sikh Organisations, Civitas and the Quilliam Foundation all warn in unison that the definition, which has already been adopted by many local authorities and UK political parties, poses a serious danger to civil liberties. The report is both timely and welcome – and should be heeded.

It is undeniably true that many Muslims living in Britain today face hostility and bigotry and are the victims of racism. But dancing to the tune of the 'Islamophobia' industry is a misguided way of addressing anti-Muslim hatred. The government has wisely rejected the APPG's definition but has set out on its own mission to define Islamophobia. This is a mistake. In the words of Professor Richard Dawkins, "Islamophobia is an otiose word which doesn't deserve definition".

The paralysing fear that criticism of Islam or Islamic culture will be branded racist is dangerous. As many British Muslims will agree, there is a lot in Islam that deserves criticism: attitudes to free speech, the treatment of women, LGBT people, Ahmadiyya Muslims and non-believers are frequently at odds with a modern secular liberal society.

There are bigots who use supposed opposition to "Islam" as a proxy for racism. Secularists must be ready to challenge the racists who stereotype and dehumanise Muslims and use religion as a convenient stick to beat people with.

But we must too resist efforts to achieve harmony through the suppression of speech – however offensive or insulting some may find it. Because there's an important discussion to be had about a religion with increasing influence over Britain's society and politics. That discussion must be unhindered by mischievous and frivolous accusations of racism.