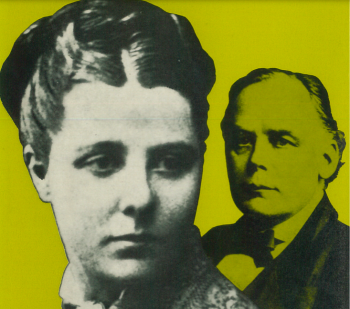 Meanwhile, Ireland's health minister insisted that all children and young adults had a right to access factual sex education regardless of the religious influence of their schools.

These are all positive signs that religion's ability to control people's sex lives is continuing to wane.

Given religion's historic and often obsessive interest in controlling human sexuality, secularists have long been at the forefront of ensuring that religion isn't able to stand in the way of people accessing knowledge about sex and reproduction, and enjoying safe, consensual, healthy and happy sex lives.

Recently, this has come in the form of defending children's right to LGBT-inclusive relationships and sex education, but a documentary aired by the BBC this week serves as a reminder that this battle is at least as old as the National Secular Society itself.

The BBC4 film – 'The rudest book in Britain' – documented the sensational Victorian high court trial concerning The Fruits of Philosophy – a pamphlet advocating for controlling reproduction and detailing methods for preventing pregnancy.

The pamphlet, written by the American physician Charles Knowlton in the 1832, was first published in Britain two years later by James Watson. After achieving steady yet unspectacular sales, the plates were purchased by Charles Watts – who had helped Charles Bradlaugh found the NSS.

The pamphlet was propelled into the public eye in 1876 when a Bristol bookseller, Henry Cook, was sentenced to two years' hard labour for selling it. To Bradlaugh and Besant's consternation, Watts agreed to the destruction of the printer's plates and his stock. Confronted with the prospect of a prison sentence, he argued that the pamphlet was not worth fighting over.

Bradlaugh and Besant thought otherwise and founded their own freethought publishing company to republish Knowlton's pamphlet. Contrary to common assumptions about Victorian attitudes towards sex, the public were curious, and the pamphlet sold 125,000 copies in the first three months. The authorities were less enthusiastic, and the pair were arrested for violating the Obscene Publications Act of 1857, which made the sale of "obscene literature" illegal.

The Queen v. Charles Bradlaugh and Annie Besant became a famous test case. Both Bradlaugh and Besant conducted their own defences; this was unusual in any event, but remarkable for a woman in the 1870s. The trial lasted four days before a divided jury returned a qualified guilty verdict. Bradlaugh and Besant, who met as members of the NSS, were convicted and sentenced to jail. But Bradlaugh, a brilliant lawyer, managed to have the judgment set aside on a technicality.

During the trial, Bradlaugh and Besant argued that the pamphlet was in the public's interest and making this information commonplace would ultimately improve societal conditions. As historian Dr. Matthew Sweet explains in the BBC documentary, Bradlaugh and Besant wanted to democratise sexual knowledge – to open it up so that ordinary people could use it for themselves. That wasn't an idea that suited everybody then – and it still isn't today.

Back then, the state, heavily influenced by the established Church of England, acted as the censor. Thanks to secularisation, we now live in a more open, tolerant and liberal-minded society where safe sex can be discussed, and sexuality explored and expressed. Homosexual acts have long been decriminalised. The majority of people today support gay marriage and are at ease with homosexuality.

Today's censors are the religious fundamentalists – and it is they who are now at war with the state over its plans to introduce LGBT inclusive relationships and sex education to schools.

This culture war is currently being played out outside Birmingham schools where protesters are objecting to their children being taught about the existence of same-sex relationships. The misinformed parents are being turned against RSE by outside influencers peddling homophobic, hysterical, conspiratorial views about a "social engineering programme" to "corrupt children" and "queer the Muslim community". The accusations sound remarkably like those levelled at Bradlaugh and Besant in 1878, who were accused of publishing material that was "calculated to destroy or corrupt the morals of the people".

It is unfortunate that secularists still need to defend people's right to access knowledge, but it is a measure of success that the state has largely moved in our direction – albeit not as far as we would sometimes like.

In putting relationships and sex education on a statutory footing, the government has –despite warnings from us not to do so – appeased faith groups by stipulating to schools that "the religious background of all pupils must be taken into account". This has given the fundamentalists just the opportunity they needed to exploit ("Our community ethos is not being respected", insist the protesters). Furthermore, dispensations have been given to faith schools to enable them to "teach the distinctive faith perspective on relationships". As a result, Catholic schools, for example, will still promote the view that homosexuality is "disordered". Parents, too, will be able to withdraw their children from classes, which means the children perhaps most in need of this information will still be denied it.

Nevertheless, the government's decision to finally come out against the protests after being unable to defuse the issues from behind the scenes is to be welcomed. On issues such as LGBT equality and the veiling of primary school children, ministers have too often stood back, leaving teachers at the mercy of mobs.

When schools become a battleground for religious fundamentalists seeking to impose their narrow ideology in schools, the Department for Education must ensure that pupils are supported to have free choices and that school leaders are not intimidated or bullied into positions that fail to serve the best interests of their pupils.

We've made significant progress since the days of days of the Fruits of Philosophy trial, but it remains vital that we continue to stand up for our principles to ensure religion isn't allowed to turn back the clock and abuse the concept of 'religious freedom' to shackle sexual expression and control people's sexual behaviour and access to knowledge.