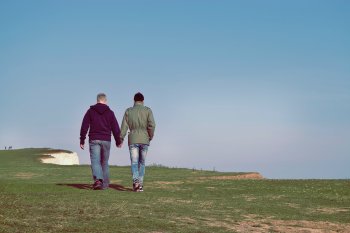 In modern Britain equality is protected and one person's protected characteristics can't be used to subjugate another. The sooner people from all faiths and none realise this the better, argues Adrian Hyyrylainen-Trett.

How do you balance people's right to observe a religion of their choice while ensuring our children have the knowledge they need to live their lives grounded in facts, rather than prejudice? The unfortunate scenes recently seen on the news at a Birmingham school go to the heart of this matter.

As an openly gay HIV+ activist, I can vouch for certain that at seven years old I knew I was different. Being gay isn't a choice. It is how you're born. But in 1986 with the onset of Section 28, a law to prevent LGBT+ equality being taught in classrooms, I was left with no place or teacher to turn to and nobody to prevent me from being bullied. Meanwhile my parents would not have countenanced the discussion, let alone the suggestion that I might fancy boys.

In 2019, I cannot and will not let the younger generations be left in the same position that I faced.

I'm turning 40 this year, having survived numerous suicide attempts in my teenage years, and fragile mental health as an ongoing battle. And I am frustrated and angered that schools across the country are being disrupted by protesters saying that their religious right trumps the teaching of LGBT+ equality.

It doesn't, and the sooner people from all faiths and none realise this the better.

The government's introduction of LGBT+ inclusive sex and relationship education in all schools regardless of faith is essential for all young people. The suggestion from Muslim activists that parents have the right to decide the curriculum for their school is inappropriate and unacceptable.

The LGBT+ inclusive teaching for the youngest children is not even about sex. It is about recognising different types of families, all of which are valid and already seen by children at the school gate.

I hold the view that people have the right to worship whomever and whatever in their own personal spaces, but they do not have the right to impose a religious doctrine on any school. We must expect schools to provide the facts and to teach that LGBT+ people exist without allowing their doctrine to override the fundamentals of our Equality Act, which protects people from discrimination. This should be a compulsory element on the national school curriculum for every school.

We live in 21st-century Britain. We welcome people from any faith, culture or race. And we welcome all those from all sexual orientations and gender identities too.

The Equality Act is very clear and states that all protected characteristics are equal. There is not one that trumps another. This promotes respect, tolerance and acceptance of difference. It means we accept different lifestyles which are natural (and fundamentally not a choice).

If those who disagree try to impose their narrow, bigoted views via school curriculum manipulation in the UK, they must know that we will not accept this.

Adrian Hyyrylainen-Trett is an HIV+ and LGBT+ campaigner, a member of the NSS's Secular Education Forum and Vice President of LGBT+ Liberal Democrats. The views in this article are those of the author and may not necessarily represent those of the NSS.