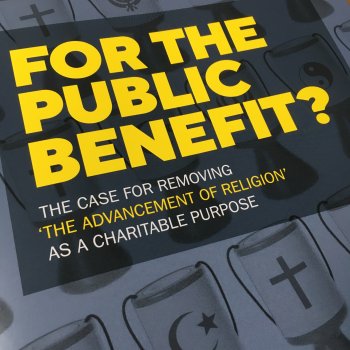 The NSS's latest report calls for 'the advancement of religion' to be removed as a charitable purpose. Stephen Evans says the law needs to align with public opinion and only support charities that deliver a genuine public benefit.

Charitable endeavours have long existed to provide solutions to many of society's problems, and to help make a positive difference. In order for an organisation undertaking charitable endeavours to be classified as a charity, it must align with at least one of the thirteen charitable purposes set out in in The Charities Act 2011. The benefits provided by most of these charitable purposes is clear; relieving poverty, promoting good health, saving lives and protecting the environment are undeniably in the public interest. However, one of these purposes is the advancement of religion – the public benefit of which is far more contestable and is based on the presumption that religion is inherently a good thing.

A new report from the National Secular Society – For The Public Benefit?– argues that the time has come to remove "the advancement of religion" as a charitable purpose, on the grounds that promoting religion provides no inherent public benefit and, in some cases, may even cause harm.

In today's society, Britain's religious outlook is constantly evolving, with a majority of Britons no longer belonging to any religion. Whilst the majority have drifted away from Christianity, minority faiths such as Islam have seen significant growth. Despite the ever-changing landscape of Britain's religious views and values, it cannot be denied that religion is no longer a core socialiser, or the exclusive source of our ethics and morality. Not only has religion ceased to be the force for social cohesion that it once was, the rise of religious fundamentalism has also demonstrated how religion can exacerbate tension and conflict in Britain. There is a clear need now for us to consider whether the advancement of religion should be regarded as an inherent public good, upholding the status of a charitable purpose.

Worryingly, granting some organisations with a charitable status on the ground of the advancement of religion alone has opened the door to allow these charities to use tax breaks to promote extremist ideologies or actively support activities that cause harm to vulnerable people, children and animals such as through non-stun slaughter, gay conversion therapy or political extremism. Despite the fact that registered charities are not supposed to cause more harm than good and cannot exist for political purposes, these charity abuses are often disguised under the veil of religious activities and are not accurately reported on or recorded.

Whilst religious and secular organisations should both be able to apply for charitable status, it is becoming vital that greater scrutiny is introducing to ensure that all charities fully meet the public benefit test. Advancing a religious worldview does no longer do enough to reassure the sceptical public that their donations and Government tax breaks are not being abused for nefarious activities. It is paramount that only organisations that genuinely serve the public interest are granted charitable status. Removing 'the advancement of religion' from the list of charitable purposes is an excellent place to start. This measure would not prevent religious organisation from enjoying charitable status but would ensure that they also demonstrate a tangible public benefit under another charitable purpose heading.

Removal of the advancement of religion for the list of charitable purposes would also remove the unnecessary burden on the Charity Commission, and its equivalent regulators in Scotland and Northern Ireland, to determine what is and isn't a religion. This move would not be taken as a measure to undermine the strong role that faith can play in communities in Britain today. Faith groups contribute greatly to social capital and have historically played an important role in the charity sector on a wide range of issues and these charities should be welcomed. However, gaining charitable status is and must be an entirely secular endeavour whereby tax benefits are provided in exchange for the public good that a charity provides.

Removing the advancement of religion from the list of charitable purposes would require religious charities to justify their charitable status in exactly the same way that secular organisations must do. In this way, not only could the public begin to rebuild its trust in the trust in the charitable sector, but could develop a greater confidence that the taxpayer is only supporting the charities that genuinely deliver a public benefit.