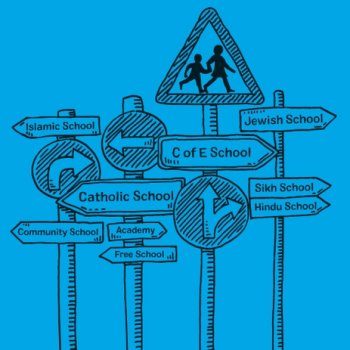 We often hear that faith schools improve choice. But an NSS report shows that choice centred narratives mischaracterise the challenges facing families and public education's role in a diverse society.

This weekend the National Secular Society published The Choice Delusion: how faith schools restrict primary school choice in England. The groundbreaking report does what the Department for Education won't: estimates the number of families living in areas with no reasonable 'choice' but a faith school. We estimate that 45,000 families a year apply for primary schools in areas of "extreme" restriction on non-faith school choice. The report unpicks narratives of school choice through original research and highlights the stories of the families affected.

Choice centred narratives frame parents looking for schools as if they are consumers choosing products in a supermarket. If cheese and onion crisps make you gag, there's nothing to stop you choosing a bag of salt and vinegar. Vegetarians may disagree with the choices of those perusing the fresh meat aisle, but they are free to make their own choices.

Narratives around school choice often ignore the restrictions that families actually face. Some people may be willing to put up with one type of faith school, but not another. People's personal circumstances and work-life balance differ to such an extent that what looks like an accessible school for one family might as well be on Mars for another. If I had a child starting primary school today I would have the 'choice' of a single community school in walking distance, the neighbouring villages only have faith schools. The vast majority of families get their first preference primary school, but that might just be a way of saying that most families choose the schools they are likely to get.

Narratives around school choice emphasise individualism over the social aims of public education. As a society we make decisions about the values schools should have and what choices are reasonable. We don't have a market led approach to whether or not schools should teach Maths or English. We don't give people the choice of schools organised around race (except indirectly through faith schools) or their favourite football team. In the age of the non-religious majority we don't give parents the choice of atheist schools. Political beliefs and identities are for many people more salient than religion. Yet far from allowing 'choice', the law forbids even independent schools from organising around partisan political beliefs.

Narratives around school choice often conflate demands from religious leaders with demand from the communities they claim to represent. This ignores the reality that many people of faith don't want faith schools and don't want to be segregated.

Narratives around school choice minimalise the role of and social harm caused by discrimination. In most areas of public life we recognise that discrimination has a harm beyond a utilitarian impact on choice. The discriminatory harm of a restaurant putting up a "No Christians", or "No Jews" sign would not be mitigated by the choice of two, five or 20 eateries on the same street without such signs.

Narratives around school choice often ignore the impact of religiously directive schools in young people's choices; their freedom of and ability to choose their own beliefs.

Parents seeking help with the religious (or irreligious) formation have a range of resources and communities to choose from. The country may have a shortage of churchgoers, but it has no shortage of churches. We're a pluralistic country and families are free to choose from a plethora of denominations and a smorgasbord of gurus. There's no reason to organise our schools around such choices.

Numbers alone (like 7,727 families assigned a faith primary school against their preference for a non-faith one) aren't enough, so the report highlights the people behind the figures. It features over 30 stories drawn from our casework and those that have shared their stories with the No More Faith Schools campaign. People of different faiths and beliefs who have found themselves turned away from their local school based on religion, or with no option but a faith school for their children.

People like Naz, from East London, who was "gobsmacked" when offered a Hindu faith school over six of her non-faith choices. People like Sarah from Swindon and Peter from Salisbury who have no local non-faith schools. People like Zoe from Wolverhampton and Kirsty from Sutton who have to drive their children every day past far closer schools whose admissions rules discriminate against their children.

The report makes recommendations for the government and policy makers. Given the power of the faith school lobby, some of these will be difficult. But surely we can at least agree that the DfE should at least estimate how many families don't have reasonable access to a non-faith school? Phasing out religious discrimination in admissions – particularly in areas of highest segregation and restricted choice – should also have widespread support. Moving towards a secular education system of inclusive community ethos schools may be more difficult but no less essential.

Please take the time to share this report with your MP.