Time to end criminality and cover-up in the Catholic Church 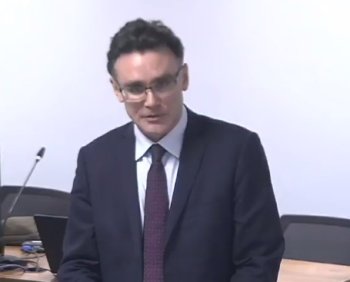 The Independent Inquiry into Child Sexual Abuse has turned its attention to abuse in the Catholic Church's archdiocese of Birmingham. Richard Scorer delivered the following opening statement on behalf of several victims.

I represent 29 victims of sexual abuse by Catholic clergy. Two of our clients will be giving oral evidence in this hearing. They experienced sexual abuse by Father Samuel Penney and Father John Tolkien respectively.

All of our clients approach this hearing with one question above all. They want to know if the Catholic Church has really changed.

For decade after decade, the hierarchy of the Catholic Church has denied the reality of clerical sex abuse, has concealed what it knows about offenders, and has blamed and disparaged victims. Recently Baroness Nuala O'Loan, the chair of the Catholic council for this inquiry, claimed that "in the parishes and dioceses of the Catholic Church, safeguarding is now a fundamental part of our culture".

This case study provides you with an opportunity to test that claim of change against the actual reality of the largest Catholic diocese in England and Wales, and test it against documentary evidence of the real attitudes, internal behaviour and practices of the archdiocese as opposed to claims which are made for public relations purposes.

Some years ago, following the Samuel Penney case, the current archdiocesan safeguarding coordinator Jane Jones authored a document entitled 'Sexual abuse by Catholic priests: a position paper'. It is a frankly extraordinary ragbag of prejudices, victim blaming and abuse minimisation. It shows a staggering lack of understanding of the dynamics of abuse, of the nature of grooming, and the vulnerability of victims, some of whom are described by Ms Jones as "willing".

Our clients find it frankly terrifying that the author of this document could be the safeguarding lead for the largest Catholic diocese in England and Wales over a period of more than a decade. It is even more alarming that the archbishops have been happy to have her in that role.

In the light of the attitudes and mentality displayed in that document it is no surprise that the 2018 independent audit, by the Social Care Institute for Excellence (SCIE), paints a damning picture of safeguarding in this archdiocese: outdated policies, wholly inadequate record keeping, shambolic databases, and responses to survivors dominated by a desire to protect the church's reputation and to protect fellow clergy at all costs. What is also notable here is that at least some of the issues identified by the recent SCIE audit were clearly foreshadowed years ago by Eileen Shearer and Adrian Child, two dedicated safeguarding professionals who did their utmost to improve child protection across the Catholic Church.

We will see what they have to say when they give evidence this week. But some of the concerns they raise in their statements – for example that Ms Jones was apparently hostile to the work of the national Catholic safeguarding bodies, that she failed to meet the detailed standards expected of those in safeguarding roles, that she was apparently hostile to external auditing and reluctant to share information – mirror some of the problems identified by SCIE in 2018.

Eileen Shearer and Adrian Child further suggest that they tried to draw some of these issues to the attention of the archbishop of Westminster Vincent Nichols, but that he was reluctant to intervene. Therefore, Archbishop Nichols and his successor cannot evade responsibility for the issues identified by SCIE in 2018; the writing was on the wall many years ago, and they have to accept responsibility for these failings too. They cannot lay it all on Jane Jones. And given the size and importance of the Birmingham archdiocese, and given Cardinal Nichols's national leadership role in this church, we suggest that if you end this week with any doubts at all about the quality of safeguarding in Birmingham and the quality of his leadership, then you can have absolutely no confidence in safeguarding in the Catholic Church as a whole.

I turn to the case studies this week. The abuse in those cases happened some years ago, but again these case studies raise matters about the culture of the Catholic Church, and the church's treatment of survivors, which are highly relevant today.

In the case of Father John Tolkien, much of the material before you concerns a complainant of abuse called Christopher Carrie. Mr Carrie campaigned for many years to expose the abuse committed by Father Tolkien, and he was awarded core participant status in this inquiry. Sadly, Mr Carrie died earlier this year before he was able to see his campaigning work come to fruition. He was never able to see the file which the archdiocese has been forced to disclose by this inquiry. This is the file relating in large part to the civil action brought by Mr Carrie in respect of his abuse. For much of his life, Mr Carrie fought to expose not only the abuses he believed had been committed against many children by Father Tolkien, but what he also believed was the archdiocese's complicity in, and cover up of, that abuse.

For anyone who has followed the saga of Father Tolkien over the years, the archdiocesan file is revealing to say the least. I would urge you to read it.

Tomorrow the inquiry will hear from one of our clients. He will tell about how he was sexually abused by Father Tolkien in 1970. You can perhaps imagine how he felt on learning recently that barely two years before his abuse, the archdiocese had been put on notice that Father Tolkien posed a risk to children. There was no law mandating the archdiocese to pass that information on to the statutory authorities. Had there been such a mandatory reporting law, his life would probably have been very different.

We then move forward to 2003 and Mr Carrie's civil claim against the archdiocese. The file, we suggest, is very revealing about the church's private attitude towards victims of abuse. The inquiry will no doubt hear much in this hearing from Cardinal Nichols and Archbishop Longley about how much they regret the abuse of children by Catholic clergy, how sorry they are that it happened, and how their primary interest is in the safeguarding of victims and survivors. But we submit that as these hearings go on, apologies from institutions are starting to sound formulaic. Every institution put under the microscope by this inquiry has started these hearings with an apology.

However, words are cheap. You have the opportunity to lift the veil and compare the public statements of Cardinal Nichols and the archdiocese with the reality of what has been going on behind the scenes. By doing that, you can assess whether the warm words emanating from the archdiocese now have any real substance.

When we read the Tolkien file, it transpires that Archbishop Nichols was intimately involved in the decision-making processes around civil claims. The Catholic Church, both in the UK and internationally, often tries to distance itself from the actions of its lawyers in legal cases by saying it is simply acting on the advice of lawyers and insurers. In fact we see from the file that the archbishop was intimately involved in strategies for defending civil cases, and in particular, in trying to use the Limitation Act to defeat genuine claims.

We know Mr Carrie's claim was eventually settled. But it wasn't settled because Archbishop Nichols wanted to do right by a victim of abuse. If you study the file, we suggest it is blindingly obvious that Mr Carrie's claim, and those of other victims of John Tolkien, were settled for one reason and one reason alone – because in the absence of a settlement, the archdiocese would have been obliged to disclose that they had received a complaint, or possibly complaints in the plural, of sexual indecency by Father Tolkien in 1968.

And it's also telling that when the archdiocese issued press releases about the Tolkien case, they frequently ended them with an exhortation to pray for Father Tolkien – not pray for the possible victims, or even just a neutral prayer for everyone involved – but pray for the priest whom they had known was a risk to children for the previous 35 years.

When I addressed the chair in the Benedictine hearing last year I said that the Catholic Church was driven by a desire to hide abuse for reasons of reputational protection. Here we see it very clearly. Decisions in civil cases made not in order to do right by the victims, but simply in order to conceal further evidence of wrongdoing. This is not a culture of safeguarding, to use Baroness O'Loan's words. It's a culture of concealment, victim blaming and denial. And we say that the time has come for this behaviour to be stopped.