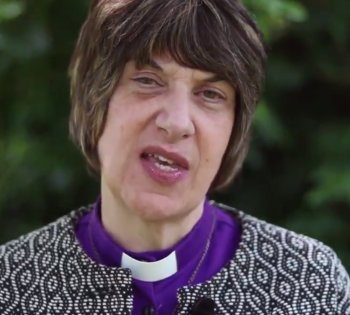 The bishop of Gloucester is entitled to question whether atheists can truly have deep love or hope, writes Stephen Evans. But the state shouldn't indulge the view that the religious are morally superior to others.

The bishop of Gloucester drew criticism this week when she questioned whether people can truly have love and hope if they don't believe in God.

Britain's non-religious majority may well resent their capacity to feel love and hope being called into question. This is, after all, deeply dehumanising rhetoric. By questioning non-religious people's ability to feel human qualities of love and hope she is casually otherising them in order to evangelise her own faith.

The arrogance is astonishing, but unsurprising. The Church of England has form on this. Last year the Archbishop of Canterbury Justin Welby used his position in the House of Lords to sing the praises of church schools by talking down community schools, opining that "confidence in any personal sense of ultimate values has diminished" in schools without a religious character.

Religious leaders have always regarded themselves as guardians against immoral conduct, and the notion that religion is a precondition for morality and values is widespread – albeit completely erroneous. Societies with the lowest levels of religious adherence tend to fare better than highly religious societies on almost every of indicator of societal well-being. And while organised religion often preaches morality, it frequently fails to live it. Despite this, researchers still find evidence of "extreme moral prejudice against atheists", with distrust of atheists strongest in the most highly religious states like the United States, United Arab Emirates and India.

This sort of prejudicial thinking against the non-religious is frequently reinforced throughout British society. Our national broadcaster excludes non-religious voices from Thought for the Day. Church schools routinely teach ethical principles such as tolerance, compassion and truthfulness as 'religious values' and seek to anchor them to the Christian faith. Other faith schools do likewise, frequently framing commonly shared human values as unique to their particular religion. By accepting this, we allow our publicly funded schools to perpetuate the myth that people who don't share 'our' faith are somehow less moral. Less human.

The supposed moral superiority of Christianity also reverberates from the heart of our democracy. Anglican bishops still have a law-making role and are given seats in our legislature to "preach God's word" and provide "spiritual insight" to the work of the upper house. Before any parliamentary business can begin, MPs and peers stand for prayers, where the speaker's chaplain reads aloud:

"Lord, the God of righteousness and truth, grant to our Queen and her government, to Members of Parliament and all in positions of responsibility, the guidance of your Spirit. May they never lead the nation wrongly through love of power, desire to please, or unworthy ideals but laying aside all private interests and prejudices keep in mind their responsibility to seek to improve the condition of all mankind; so may your kingdom come and your name be hallowed."

The established status of the Church of England gives it a privileged platform to peddle its subtle form of prejudice against non-Christians, and particularly atheists. But Christianity is hardly alone in doing this – or the worst offender. Religious supremacism is rife in all religious traditions, leading to hostility, mistrust and demonisation of the 'other' – often with dire and bloody consequences. Atheists, too, can be guilty of similar bigotry against believers.

If members of faith and belief groups want to assert their moral superiority they're perfectly entitled to do so, but the state shouldn't support this sort of tribalism from people who struggle to comprehend that others can have rich, meaningful, loving and ethical lives without believing in whatever they do.

The Church of England likes to justify its privileged status as the state religion by selling itself as a voice for all people of faith, not just Christians. But a majority of British people don't have faith and there's no good reason why, in modern Britain, the faithful should enjoy special representation, especially at others' expense. The non-religious may have legal equality, but it's time they enjoyed parity of esteem, too.

I understand Rachel Treweek is an evangelical and wants us all to share the "mystery of God's love". That's fine. But her words this week revealed a form of self-righteous bigotry against non-believers. I'm sure the prejudice is unintentional but this isn't the sort of 'moral leadership' the state should be officially endorsing.

Her comments are another reminder of why it's time for church and state to go their own ways.