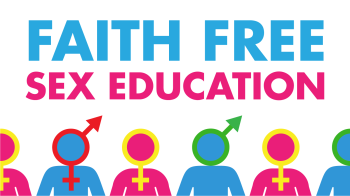 Recently I received a letter from my daughter's school (a local authority-run comprehensive – not a faith school) about an upcoming theatre piece as part of the PSHE curriculum for 14-15 year olds covering sex and relationships. The performance was promoted as follows:

"An informative Sexual Relationships Education (SRE) session performed by a charity who provide Theatre in Education resources for young people and schools covering issues in the PSHE curriculum. The performance is titled 'Happy Ending' and follows the relationship between two 16 year olds. In three takes we discover how their relationship unfolds 4 weeks later, 4 months later and 4 years later."

It wasn't compulsory to attend and I just happened to look up the charity out of genuine interest. My first degree (a long time ago) was in Drama, Theatre In Education was a part of the course and I have many friends who work in theatre – so it could well have involved someone I knew. The theatre company was part of an openly Christian charity operating out of a large evangelical church organisation. On the Charity Commission website its stated aim is 'to further the Christian religion' and its details include the line: "A theatre company that tours nationally exploring Biblical and Life Issues".

Alarm bells obviously rang immediately. An openly Christian theatre company was delivering a sex education lesson as part of the school's PSHE programme – and this was not being made explicitly clear to parents.

My initial enquiry was whether the school was aware of this. Was it possible that the theatre company had somehow misrepresented itself? I contacted both the school and the company. Both said the school was aware of the nature of the charity but that the content of the show had nothing to do with its Christian beliefs. Furthermore a teacher at the school had worked with the charity and had co-written the show, which had been used as a resource for the previous eight years. I was very surprised by this and then asked both to clarify how the theatre company ensures that its faith plays no part in the content of this production, given the publicly stated aims of the charity?

It soon became clear that I was in a grey area – the charity was open about its faith, but kept insisting again and again that its faith did not inform the content of the show. The argument I received from the school's PSHE teacher was that the charity's Christian background was "inconsequential" and the show fulfilled PSHE criteria on "healthy relationships".

In discussions with friends the National Secular Society was mentioned and I also contacted it for guidance and advice. The NSS gave me some great information and advice on how to approach this – it advised me to look at the school's own equality policies and gave me information about other non-religious organisations which provide PSHE resources.

I decided to focus my attention on the school and copied the NSS into emails. I kept my line of enquiry simple. Given the show was not compulsory, why did the school not publicise the fact that it was (indisputably) a Christian charity, which would help parents make a more informed decision on whether it was suitable or not?

I would expect exactly the same disclosure for any charity which might have any sort of religious, political or other agenda.

I kept pressing and was eventually onto the head of year at the school where I put my case again, and asked why the Christian background of the charity was not mentioned in the publicity. Again, I received initial "reassurances" – but no actual evidence.

I had already decided to allow my daughter to attend the show (although not compulsory the alternative was an afternoon doing school work in a classroom elsewhere away from her friends!). When she came home on the day of the show she confirmed that there was no mention of faith, god, or any other moralising about contraception, same sex relationships, etc. This was all in line with what I had been told and which I was pleased to hear – in fact, it all sounded very useful.

However she also told me the obvious 'take home' message of the play itself was not to have sex before marriage. The 'happy ending' of the title referred to a scenario where a couple who abstain from sex for four years are the ones who eventually get engaged. I wasn't remotely surprised by the pro-abstinence message – although given the content of emails from the charity and the school I had actually expected a more subtle approach than this.

Although the actual content of the show had no bearing on the line of argument I was taking I decided then to speak to the head of the school year and we had a friendly but frank discussion by phone. The final result was an email telling me that they would be reviewing the PSHE provision this summer and if the charity were selected again, its Christian background would definitely be mentioned in any publicity.

Compared to other people's stories that I've read on this site this may all seem - to borrow a term used by the PSHE teacher - 'inconsequential'. Nobody was harmed or abused, everybody was well meaning and open and trying to work within 'the rules', and the somewhat clumsy message delivered by the show probably fell on largely deaf ears.

However, a principle was at stake. If any religious organisation is involved in the education of my child then I have a right to know about it.

So I hope this helps. What I've learned from this experience is don't give up – ask direct questions; don't be fobbed off with unsatisfactory answers or vague assurances; be polite but firm; do your research; and use resources such as the NSS to help strengthen your argument.