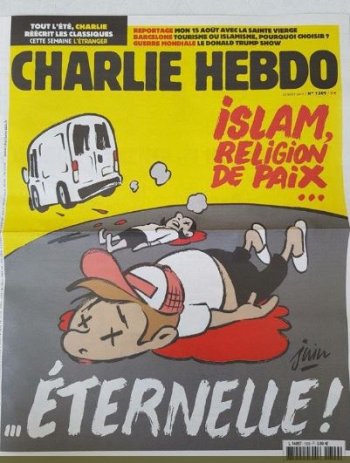 Three years after the Charlie Hebdo massacre, Chris Sloggett says it is a moral duty to push back against those who invent outrages to impugn the magazine's reputation.

That's what we hear from politicians after terrorist attacks. It's one of those inevitable parts of the routine. Before the landmarks light up and the flowers get laid, the platitudes get uttered.

There's only one flaw. They're often not true.

Three years ago two men walked into a small magazine's office in Paris and shot its journalists dead en masse. They wanted to stop them, and others, from drawing pictures of someone.

Now nobody, including the people they attacked, draws that individual. This week it emerged that one in every two of the magazine's sales is needed to pay for security. Its journalists work at a secret address and get regular death threats. A year after the attack one visitor described the offices it had moved to as "the villain's lair in one of the dumber Bond films, hermetically sealed, massively protected".

There have been worse Islamist atrocities in Europe in recent years. But none illustrates the point that terrorists can beat societies which irrationally hate any values they could credibly call their own more than the Charlie Hebdo attack of 7 January 2015.

Most people remember "Je suis Charlie", the wording of which spoke to the hyper-individualistic times we live in. In reality very few of us deserved to call ourselves Charlie. But more significant was the reaction to that movement from people who saw an office full of dead bodies and a hashtag that made them uncomfortable and decided the real problem was the hashtag.

You could accuse both these groups of using the slain cartoonists as pawns in an exercise in virtue-signalling. But at least one of them was trying to display solidarity with the victims of a massacre. From the other we heard, almost instantly, "cold-blooded murder is bad – but have you seen what those victims wrote?"

Two days after the killings the New Yorker published an ill-informed mixture of slander against the dead and whataboutery. Vox said Charlie had "indulged and worsened" social ills such as "empowering the majority, marginalising the weak, and ridiculing those who are different".

Once Charlie made the incredibly brave decision to publish a new cartoon of Muhammad the week after the attack – with a message far more reconciliatory than most of us would manage in those circumstances – the meltdown really began.

"Did Charlie get it right?" pontificated a series of Guardian columnists. Several expressed their disapproval, as if their opinion on the front page of a magazine few people had heard of until a few days earlier was remotely important in the circumstances. Perhaps next they'll tsk-tsk at a sexual assault victim for daring to go out to a bar in a short skirt after being attacked while wearing one. Several of the responses were appalling but first prize went to Joseph Harker, who wrote one of the stupidest things you will ever have the misfortune to read. Charlie, he claimed, had "used a blunt instrument to smash apart a genuine moment of hope and togetherness". (He's now the paper's deputy opinion editor.)

Crowds demonstrated against Charlie's cartoons. A petition, apparently signed by 100,000 British Muslims, called for "civility". The magazine was named 'Islamophobe of the year'. The Pope criticised the cartoonists. And all this despite the fact the terrorists had already gained a massive win, as nobody reprinted Charlie's original cartoons.

As people desperately searched for reasons to criticise the victims or called for 'nuance' (read: criticism of those just killed for having the temerity to be in the newspapers), one common accusation was that Charlie had 'punched down'. This was really just a way for people to feel good about themselves by patronising Muslims and accusing the dead of being bigots. And it wasn't even true. A magazine with a readership of 60,000 mocked a man who ruled over large numbers of people during his life and still had 1.8 billion followers 1,400 years after his death. Two of those followers took defending him to the extreme and killed the people at the magazine. Remind us again who was punching down?

Such an argument could only be made with a straight face in societies which routinely expect nothing from the religious. We're so used to this that it's just background noise in our news cycles. Two weeks ago, in her Christmas message, Theresa May said Britain should be proud that its "Christian heritage" gives its people the confidence they can "practice their faith free from question". That's the age-old logic that those who ask questions about religion should shut up. Her words went unnoticed.

The outrage against Charlie was highly selective from the beginning. The month after the attack Le Monde analysed the magazine's content. Out of its past 523 front pages just seven had focused on Islam. And those who knew what they were talking about realised that Charlie was an anti-racist publication, which is why the group SOS Racisme had given it an award.

It doesn't matter to the please-give-me-a-reason-to-hate-the-victim brigade. Every few months over the last three years, they've resurrected their campaign against Charlie Hebdo. There was the misrepresentation of its cartoon about Alan Kurdi, the infant refugee who drowned between Turkey and Greece. It was accused of linking all Muslims to the Brussels bombings. In fact it had written a reasonable editorial, which – if people bothered to read it objectively – said "the dread of being treated as an Islamophobe or called a racist" had contributed to the bombings. It was condemned for mocking politicians' perennial insistence that Islam is a "religion of peace" after the Barcelona attack.

On it goes, Twitter storm after Twitter storm. "They have the right to say it," we hear, "but". The 'but' always makes the bit before it irrelevant, because if someone walks into your office with a gun and demands you don't say something, someone has to help you or you will be silenced. The condolences of those who tell us to bury the work of the dead with their bodies are meaningless.

Journalists who hold senior positions in the mainstream press, leaders of apparently respected advocacy groups and French MPs join in. Press coverage is led by implied questions about how offensive the content is. There is almost no pushback against the much more offensive sight of people doing whatever they can to place the work of the victims beyond the pale. We hear very little about Charlie's struggles to stay afloat or the continued trauma of its staff; we hear plenty about 'what those bigots have published this time'.

Perhaps we should try to be charitable. It's not unreasonable to find Charlie's content shocking if you come across it. Events such as the Finsbury Park attack remind us that there are good grounds for concern about anti-Muslim bigotry. And even cartoons with a heartening message can easily be misunderstood. A cartoon that satirises racism may appear racist. A cartoon mocking the West's shallow consumerism as refugees drowned could appear to mock the refugees.

But even when the truth about Charlie is pointed out, many of its detractors do not care. They make a wilful effort to read bad faith into its content.

And more importantly, as Charlie had not incited violence (or even come close to doing so), that content was not the point. Charlie is not – by one of its journalists' own admission this week – the magazine of "angels". It's a magazine of the godless, the coarse, the niche and the offensive. That's its job. Few people spend their time reading the journals that feature in the final round of Have I Got News For You. We would still have a duty to defend them if violence and threats pushed one of them out of business.

If you want to read something else, buy something else or start your own magazine. If you dislike it, deal with it. But get some perspective. A group of journalists died for the right to speak. Nobody cares about you or your precious feelings about what they wrote.

When Charlie's critics face pushback they often respond by saying: we have free speech too. That's true. But their claim to be the true persecuted party is a grotesque red herring. When you draw cartoons, no matter how 'offensive' they may appear, you don't deserve to die and then have your reputation inaccurately impugned when you can't respond. When you use the freedoms that others died for (and for which you pay no price) to try to shut up those who survived, you deserve to be called a stinking hypocrite, reminded of the consequences of your actions and made to feel very uncomfortable.

One of the few sources of hope in this episode is that those of us who see what's happening have free speech too. We must use it to push back. Criticise those who drum up confected outrages against the victims of this atrocity. Complain about press coverage which implies their position is reasonable. And call their actions what they are: an attempt to shut up freethinkers, treat Muslims with condescension and – wittingly or not – help terrorists achieve their goals.

The picture shows Charlie Hebdo's cover after the Barcelona attack.