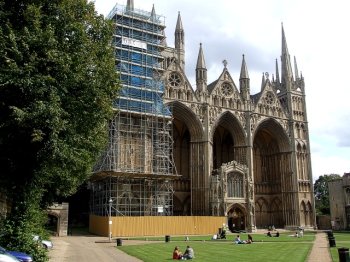 The Government is hailing the work done under a fund for the restoration of cathedrals. But NSS treasurer Ed Moore asks if it is really a taxpayer-funded opportunity for Church of England archbishops to grab power.

As Chancellor Osborne's 2014 First World War Centenary Fund for cathedral restoration draws to a close, Government reports begin to sing the praises of the works carried out.

The Department for Communities and Local Government's 'Cathedrals and their communities – a report on the diverse roles of cathedrals in modern England' states: "The First World War Centenary Fund has had an enormous impact for cathedrals across the country, enabling crucial restoration and maintenance works to be carried out. Between 2014 and 2016, £40 million was allocated for urgent repairs at 57 Anglican and Catholic cathedrals in England."

Almost simultaneously this month the 'Taylor Review: Sustainability of English Churches and Cathedrals', commissioned also by the Chancellor and the DCMS, has reported on similar lines – with a recommendation: "The Panel considers that a nationally administered fund for works to keep cathedrals safe and open, similar to the First World War Centenary Cathedral Repairs Fund, should be considered as a separate exercise."

While I'm sure the money has been put to good use the whole grant process continues to trouble me.

Firstly the money. The fund was set at £20m in 2014 and then extended in 2016 with a further £20m, all of taxpayers' money. Why was taxpayers' money used? The Church of England is one of the richest organisations in the country; the Church Commissioners sit on £7bn, the Diocese charities have more than £4bn and even the cathedrals themselves have assets of more than £1bn. If £40m can make such a difference why hadn't the money already been provided?

Secondly the process. Chancellor Osborne provided the cash directly from the Exchequer, paid over to the Department of Culture, Media and Sport (DCMS) and from there to the Archbishops' Council. The DCMS produced the grant contract despite having no history of providing repair grants to the Church of England who are not one of their Arms Length Bodies (ALBs). Once the contract had been set up they seemed to have stayed well away, handing over money when demanded while ignoring grant terms on yearly reporting and that financial need should be a consideration.

The Archbishops' Council in turn assembled a brand new expert panel, which received and assessed grant applications from both Anglican and Roman Catholic cathedrals. Unusual? Why would a body controlled by the Church of England be in charge of repair budgets for Roman Catholic cathedrals? Surely a more neutral body would have been preferable, such as Historic England? Even the Church Commissioners have more experience in handling grant funds and paying cathedrals than the Archbishops' Council, whose budget is just £85m and who have less than £40m of their own assets to manage.

So if the CoE can afford to pay and the Archbishops' Council are not the most suitable managers why was this scheme set up as it was? Might there be an ulterior motive? Here's one theory for you to consider: perhaps the real reason for the Fund was to help the archbishops gain influence over the uppity and independent cathedrals.

The Church of England is split into three layers; the Archbishops' Council, General Synod and Church Commissioners at the national level; the Diocese Boards of Finance at a regional level; and Parish Church Councils (PCCs) at the local level. Income flows from parishioners to the PCCs, a portion is sent on to the Diocese and a share of this sent on to the national bodies, who redistribute a portion of the funds back down again to support mission initiatives and the poorer parishes. So where do the cathedrals fit into this? Absolutely nowhere.

The Cathedrals are each set up and run as Ecclesiastical Corporations in Aggregate and run independently of their diocese and also of the national church bodies. They are not registered companies so not answerable to Companies House and are charities for tax purposes but not exempt, excepted or answerable to the Charity Commission. The only vague management control is by the 'visitor' (usually the diocesan bishop), but his or her powers seem limited.

The current difficult situation has been articulated recently by Bishop Allister of Peterborough in an article in Church Times:

"Bishop Allister argues that cathedral chapters are exempt from scrutiny by the Charity Commission or Church Commissioners, that the diocese has 'absolutely no standing', and that the bishop has no powers 'except the draconian one of Visitation — and that process has major legal complications and difficulties'. The cathedral council and the college of canons did not necessarily have the expertise or specialist staff to allow them to exercise 'real scrutiny' of the accounts, 'and they have no powers to mount an effective challenge to the Chapter'."

The Archbishops' Council is supposed to provide strategic direction to the whole Church of England. How do they do that if one whole branch of the church (a very conspicuous one) can't be directed? Why not try cash and flattery?

The Archbishops' Council needs neutral money. They can't use the Church Commissioners as the question would be asked why the money wasn't handed over directly. Also, it has to be from someone who can flatter too. Ah yes, the Government.

The coalition Government in 2014 is rocky, just hanging on in power and sensitive to criticism. The bishops in the House of Lords are not particularly friendly so a deal is agreed, £20m (later extended) for cathedrals and their great worthiness is proclaimed loudly, with the anniversary of a war given as justification.

The DCMS is told to sort it out, contract arranged then left alone. The Archbishops' Council gets access to the money and the independently minded cathedrals have a conundrum. Go cap in hand or miss out on the cash. Of course they take the cash as it is after all free money, apart from losing a little dignity.

The Archbishops' Council is careful to spread the riches widely so everyone gets some, ignoring actual financial need. All are happy; the church says nice things about the Government, the cathedrals can build new facilities while their repairs are taken care of. The Cathedral deans feel appreciated and the bishops get praise for sorting it all out. Of course the next steps are subtler, trying to make the cathedrals less independent. The obliging Government starts the process with the Sustainability of English Churches and Cathedrals review on the back of the cathedral grant itself. The Archbishops' Council then continues the process by setting up in April 2017 a cathedral working group to address the concerns raised in Peterborough. Job done.

So who might feel displeased? How about taxpayers? With the national debt soaring why are we being used to sort out church politics?

Not only are we £40m out of pocket but the Church is lobbying to make the temporary cathedral grant scheme a permanent one, as has happened with similar schemes in the past.

The Archbishops' Council is preparing a report at a cost of £40,000 likely arguing how wonderful the results were from the grant money to the whole local community and so should be continued. The sustainability review has sowed the seed and this justification will, they hope, be enough to set it in stone.

That's my theory. The WWI Centenary Cathedral fund is a taxpayer funded Church power grab, with the risk of a new permanent draw on cash to come. I may be wrong, but if right might the Government have broken more rules than simply being bashful?

The Cabinet Office issues grant funding guidelines in "Government Grants Minimum Standards" and in this it states a goal that a grant should "deliver the Government's stated policy that taxpayers' money is used as intended".

So if the actual rather than stated goal was to bring the cathedrals into line then the grant was not correct. An exclusion clause is also problematic: grants should not fund "payments for works or activities which the grant recipient or any member of their partnership has a statutory duty to undertake, or that are fully funded by other sources".

Cathedrals are governed by Cathedrals Measure 1999, clause 25, which states: "The Church Commissioners shall have power to make out of their general fund to any cathedral such grants as they may think fit for the repair of any chancel, other than the chancel of the cathedral, which that body is wholly or partly liable to repair."

So a cathedral must pay for repairs as a statutory duty and so is not eligible for grants?

I wait for further developments.