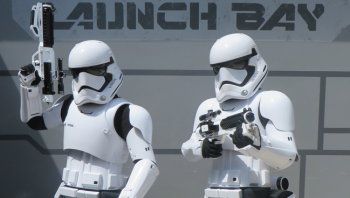 Sabbatarians in Lewis claim a right to impose their beliefs on others, including by banning screenings of Star Wars on Sundays. Megan Manson asks if they would make these demands if Jediism was a recognised religion.

Obi-Wan has taught them well. When An Lanntair arts centre on the Isle of Lewis announced it would screen Star Wars: The Last Jedi on a Sunday in January, tickets were sold out before Christmas.

But the Force is not with everyone. For 170 years, Lewis has been subject to the demands of Protestant fundamentalists who seek to impose their views upon everyone on the island – including their belief that Sundays should be for praying, not for working or for leisure. As a result, Stornoway's local-authority run swimming pool is forced to close on Sundays, and notices ask parents and children not to use parks on the Sabbath. Those who do try to exercise their freedom on Sundays have found themselves subject to intimidation, harassments and veiled threats of boycotts.

In this case, Stornoway Free Church was outraged by An Lanntair's temerity to determine its own opening hours. Its minister Rev James MacIver was particularly incensed the arts centre had not even consulted the church on its decision to open on the Sunday. "I understand they had a conversation among their own members but it would be better if they [came] to church and debate and make their case," he complained. It's almost as if An Lanntair thought its opening hours were none of the church's business. The nerve!

Rev MacIver's issue is that in letting people watch a movie, An Lanntair will "upset the spirituality of the Sabbath." But has he not considered that, for some, going to watch Star Wars may in itself be an act of worship?

Although it may have its origins in a mischievous act of popular rebellion against census recording, Jediism has developed into a real spiritual movement. Taking its inspiration from the Jedi Knights of the Star Wars franchise, whose mystical beliefs and practices are themselves based largely on East Asian religions, Jediism even has different 'sects', including the Temple of the Jedi Order and The Church of Jediism. The latter's founder Daniel Jones claims that Jediism has 500,000 members worldwide, and that in Britain, Jedis outnumber followers of Paganism, Humanism and Rastafarianism combined.

But whether Jediism can be called a "religion", with all the special rights, protections and privileges that such a designation enjoys, is subject to debate. While the Temple of the Jedi Order is recognised as an International Ministry and Public Charity in the US, its application to become a registered charity in the UK was rejected because the Charity Commission do not recognise Jediism as a religion.*

The Charity Commission's decision was not uncontroversial. Legal experts at Cardiff University, Farrer & Co and Bircham Dyson Bell have criticised some aspects of the decision, including its lack of clarity and consistency in application to other bodies that are recognised as religious. Indeed, one can question why the responsibility should fall upon the Charity Commission to answer the deeply philosophical question of "what is religion?"

But supposing Jediism were officially recognised as a religion. What would the world make of the Stornoway Free Church's behaviour then?

In arguing that Jedis should be denied the right to watch The Last Jedi on a Sunday, the Stornoway Free Church could be accused of discriminatory and bigoted attitudes. Some would even argue that the Church was threatening the Jedis' right to religious expression according to Article 9 of the Human Rights Act. In fact, if Jedi were a recognised religion, I suspect that Rev MacIver may have thought twice before declaring that The Last Jedi should not be shown on a Sunday.

This hypothetical scenario should give us all pause for thought. In reality, it isn't the freedom of a small religious group that the Free Church is attempting to undermine. It's the freedom of the masses, the increasingly non-religious (and religiously liberal) who just want to relax and enjoy a good film on a Sunday. They shouldn't need any sort of religious excuse not to observe the Sabbath the way the fundamentalists want them to. That's individual liberty in a nutshell.

Fortunately, the hold of the fundamentalists appears to be on the wane in Lewis. Over the past 20 years, from airports to ferry companies to independent shops, an increasing number of businesses have peacefully defied the Sabbatarians by extending their operation hours to Sunday. The threat of harassment is still real, but slowly it appears that this Rebel Alliance of ordinary people are gradually toppling the fundamentalist Empire. May the Force be with them.

Picture by Quarax (Own work) [CC BY-SA 4.0], via Wikimedia Commons

*The Charity Commission decision applies to England & Wales, the Office of the Scottish Charity Regulator does not appear to have expressed an opinion. But it's worth noting that in the last Scottish Census, more people identified as "Jedi" than as members of the Free Church.