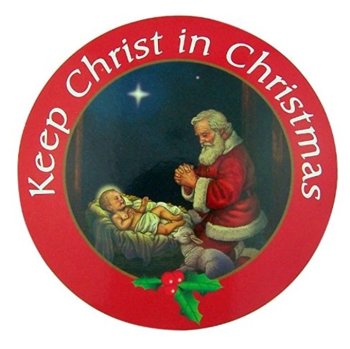 It's coming… the 'WAR ON CHRISTMAS!!!' You've been warned: the seasonal variation on the Christian persecution fantasy is going to swing into action sometime soon. Like its non-seasonal cousins the one-sided 'war' will follow a familiar pattern:

We saw a practice run of this earlier in the year with the 'War on Easter' story. To recap: the National Trust partnered with Cadburys Egg Hunt leading to a day-long hissy fit from the established Church because the Trust didn't use the word Easter enough ('not enough' meaning over 13,000 references on its website). While in Saudi Arabia (a country that actually does persecute Christians) the Prime Minister jumped on the outrage bandwagon.

To just laugh off these silly season stories ignores their power in bringing the narrative of Christian persecution into the mainstream. The ultimate goal of this narrative is Christian supremacism. It is to marginalise any group or cultural expression that isn't Christian, and it is to roll back every equality and human rights law that touches on religious privilege.

We can't predict where the next front of this war will open up, but here are a few possibilities to help you prepare.

One of the highest profile battle in the war on Christmas is the fabled banning of 'Merry Christmas' and its derivatives. Last month Donald Trump became the first sitting President to address the recognised hate group the 'Values Voter Summit'. While brandishing his theocratic credentials the president told the crowd how he'd won the war and "We're saying 'Merry Christmas' again".

Lest you think this is just an American issue, remember that last year ten MPs put forward an official motion that "reaffirms the right of every person in this country to use the phrase Happy Christmas". Ten elected MPs used Parliamentary resources to engage in their bizarre fantasy that people can't say "Happy Christmas". Ten adults thought this was a topic worth debating. Then these self-appointed Christmas defenders proceeded to lecture the nation on the "real reason for Christmas", and their uninvited thoughts on how people should be celebrating it.

Back in 2011 the Daily Mail had to apologise after falsely claiming that politically correct local authorities were replacing Christmas with 'Winterval'. They trotted this canard out again when they claimed the EHRC was going to bring out a report "criticising overzealous organisations that unnecessarily drop references to Christmas". In reality the report demolished the Christian persecution myth. Nevertheless the Winterval myth just doesn't seem to die. It even got an airing at the recent UKIP conference, courtesy of Anglican Bishop Michael Nazir-Ali.

In researching this article what becomes clear is the interconnectedness of the Christian persecution fantasy. Almost every article on every non-issue mentions a plethora of other non-issues. Repeating a myth often enough doesn't make it true, but it gives it a sense of truthiness.

The battle over Christmas adverts

In recent years the release of big brand's Christmas adverts have become "events", and wherever there's a news event involving people having the wrong sort of fun they'll be there jumping in to put them straight with a bit of guerrilla religious literacy training.

Leading the fightback against this year's seditious insufficiently Christian adverts were whyChristmas.com's James Cooper, and champions of the oppressed Christian masses, Breitbart. Mr Cooper lamented that John Lewis's story involving a boy and his imaginary friend wasn't Christian enough. He wants retailers to "do some homework" to learn about "the real meaning of Christmas" – i.e. his meaning, which needs to be "reclaimed".

Breitbart was so upset by Tesco's Christmas advert that they didn't know what to complain about first: the glimpse of two same-sex parents or the presence of a Muslim. Why does the spectre of Muslims celebrating Christmas unite both Islamists and anti-Muslim bigots in such fury? The message of "However you do Christmas, Everyone's Welcome" was just too much for them. Because of course any aspect of inclusion is "part of a wider trend towards pushing Christianity out of the festive season to make way for new faiths and secular themes".

This is an organisation that regards red Christmas cups as "emblematic of the Christian culture cleansing of the West". See if you can spot the subtle dog whistle from the organisation dedicated to preserving Christian religious privilege as the West's only shield against 'white genocide'.

As you'd expect, the article goes on to recycle related mythical examples from the war on Christmas, claiming that Digital Cinema Media (DCM) were persecuting Christians by their equally applied policy of not screening explicitly religious or political adverts. The same policy would also 'ban' a party election broadcast or this 90 second film from the NSS – share it far and wide, don't let those evil cinemas silence us.

This whole idea gained prominence when the Church of England made a YouTube video which they wanted to show in cinemas, but were informed by DCM that the advert fell afoul of their policy. So they concocted a media campaign, in order to leverage paranoid fears about politically correct persecution and a sycophantically fawning media, for huge amounts of free advertising.

That the strictly religious aspects of Christmas are far less popular than the secular trimmings, isn't news. All you need to do is run a simply survey/market research, get a predictable result and feed it to the outrage machine. One year it will be complaints that retailers aren't selling enough Christianity themed Christmas cards, the next it will be advent calendars. Have they been taken over by politically correct secularists? Are they embarrassed of our Christian heritage? It couldn't possibly be that people just aren't interested in them.

In 2014 the topic picked was school Christmas shows including more secular festive songs such as popular Disney tunes, and less traditional nativity plays. This complaint is such old news that it formed the cutting edge satire of the Beano Christmas special of 1999.

The BBC covered Don Horrocks, the Evangelical Alliance's head of nativity policing, fretting that children singing 'let it go' was "extreme political correctness or perhaps it reflects a nation too embarrassed to face up to its Christian heritage".

Why do these people hate Christmas?

These people seem to resent any Christmas that isn't theirs. They claim secularism is attacking Christmas or marginalising its 'true meaning', when they just want the privilege of defining others' meaning and are reacting against secularism's defence of everyone's right to assign whatever meaning they choose to Christmas or any other day of the year.