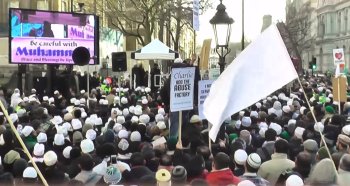 It is now 38 years since Monty Python's Life of Brian was released in November 1979, despite protests. But Chris Sloggett says we aren't truly free to engage in blasphemy today.

It is now 38 years since Monty Python's Life of Brian was released in November 1979, despite protests. Chris Slogget asks: are we truly free to engage in blasphemy today?

Protesters called it 'a vicious attack upon Christianity'. In the UK 11 councils banned it and 28 raised its age limit by giving it an X (18) certificate. Ireland and Norway were among the countries to forbid showings.

It is now 38 years since Monty Python's Life of Brian was released in November 1979. At the time the Python team insisted their film 'does not ridicule Christ, nor does it show Christ in any way that could offend anyone, nor is belief in God or Christ a subject dealt with in the film'.

The British Board of Film Classification defended its decision to give the film an AA (14) rating without cutting it, saying 'a degree of irreverent scepticism' was 'surely permissible in a democratic society'.

These defences helped to rebut a campaign of misinformation against the film. But they were also beside the point. Life of Brian did not harm anyone. Its creators did not need to justify themselves. People were free to watch or ignore their art as they saw fit.

Thirty-eight years later, if we look at the evidence selectively, we could convince ourselves we have, indeed, learnt the lesson. In England and Wales, laws preventing blasphemy and blasphemous libel were abolished in 2008. Ireland is now preparing for a referendum on abolishing its own blasphemy law.

Today, censoring Life of Brian seems inconceivable. When Glasgow's city council finally decided to allow screenings of it in its cinemas in 2009, those making the decision said 'the world, and people's attitudes, have moved on in the last 30 years.'

If we believe this, however, we are kidding ourselves.

This week we were once again reminded that we live under a de facto blasphemy law. The staff of a small French magazine, who have already lost 12 colleagues to the violent, self-appointed blasphemy police, saw a spike in the regular death threats they usually receive. Charlie Hebdo's latest non-crime was to publish a cartoon mocking a Muslim scholar accused of rape.

The global picture remains bleak for dissenters from religious orthodoxy. There are laws against blasphemy in dozens of countries. In several, an accusation can mean death or life-ruining imprisonment at the hands of the state. In many more, vigilante groups kill those who speak their minds.

The situation is worst in the Muslim world. But Islamists are not alone in believing they have the right to shut people up on religious grounds. In September, Meat & Livestock Australia (MLA) created an advert that featured a range of gods and prophets. Jesus, Moses, the Hindu god Ganesha and L. Ron Hubbard were among those who took part. One woman represented 'no religion.' In the cleverest twist, Muhammad phoned in; viewers were told he couldn't 'make an appearance.'

Fifty people complained to Australia's advertising watchdog. That could have been shrugged off – until the watchdog decided to investigate. India's high commission in Canberra launched an official complaint and YouTube removed the video from broadcast in India, citing a government complaint.

Much of the anger came from influential Hindus objecting to Ganesha's role. But why would they think they might be able to shut down an advert? And why would press coverage of the advert focus on whether or not it was 'offensive', rather than explore the implications of a religious group attempting to impose a blasphemy code? (You can read just a few examples of this kind of coverage here, here, here and here).

Are we indulging fundamentalists?

If readers will indulge me, the answer lies in a metaphor from my previous career. One of the first things any decent teacher quickly learns – often the hard way – is that if they give one child an opt-out from the rules, others will push the boundaries too, and the teacher will have no justification for enforcing them. Trust between the children and the teacher, and among the children themselves, breaks down. Lessons become dominated by an unseemly battle of wills, and nobody does anything productive.

You may feel sorry for a particular child or group of children; question whether the problem is not the children misbehaving, but you making unreasonable demands; or just grow tired and opt for an easy way out of the dilemma. It may seem sensible to bend the rules a bit. You can make all sorts of post-hoc justifications for your behaviour.

This is how the secular world has behaved towards Islamic fundamentalists since the Rushdie affair of 1989. In the West alone, novels have been cancelled; events attacked; cartoonists and film-makers killed; dissenters forced into hiding. And in response, we have shrugged.

Our politicians give us mealy-mouthed platitudes about refusing to give in, but the bullies always win. The tiny number of publications who reprinted the Danish cartoons from 2005 or Charlie Hebdo's work were quickly silenced. Charlie itself stopped drawing Muhammad. Sometimes officials even do the censors' work for them, as when Louis Smith was banned from gymnastics for mocking Islam at a wedding.

We convince ourselves this is not what is happening. 'I'm for free speech, but…' we say, as we scrabble around to find justifications for our cowardice. We smear the victims (remember the dozens of writers who protested PEN's Freedom of Expression award for Charlie Hebdo?). We tell ourselves we are standing up for the underdog, when we are really siding with theocracy. We change the subject and kick the issue down the road.

Nobody even pretends to know what the long-term solution might be. We just hope we can hobble through, or point fingers at those raising questions. But now the other children are playing up. We have no way of defending our principles. We are wasting plenty of energy on pointless non-outrages.

And our resolve on other liberties looks weaker too. If we accept an Islamic blasphemy code, on what principle will we reject polygamy, 'modesty' codes, child marriage, FGM or honour killings? If one group of theocrats can have what they want, why wouldn't Indians, Russians, Americans or others turn to leaders who channel their own forms of religious intolerance?

Happy birthday, Life of Brian, and thank you. But, as the ex-Muslim writer Ayaan Hirsi Ali has pointed out, we will only be able to celebrate your legacy when we have 'Life of Muhammad'.

And we are a very long way from that point, as things stand.

This article was originally published on Conatus News and is reproduced here with permission.