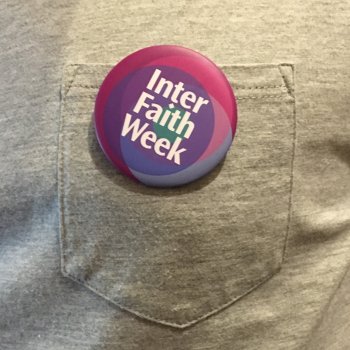 Interfaith, the constructive dialogue between people of different faiths in order to promote mutual understanding, is a worthwhile initiative. There can be no doubt that increased interaction and discussion between different groups in society is a positive means of promoting greater cohesion and tolerance. Interfaith can bring together people from communities who might not otherwise interact, and help to foster greater knowledge when it comes to religion and belief. It can also provide a means for people from different communities to come together and discuss issues they may share, and a space where people can openly question, challenge and confront ideas and practices.

A basic principle of secularism, the equality of people of all religions and none, is a fundamental starting point when it comes to successful interfaith dialogue. After all, how can one engage in balanced dialogue when there is imbalance in the perceived status of those taking part? Every individual around the table at an interfaith discussion, regardless of their religion or belief, should be perceived as equal.

And when it comes to applying the basic goals of interfaith in the wider world, this can only be truly achieved if there is real equality and freedom between people of all faiths and none in society, and no religion or belief gains an advantage through state support. It's all very well to talk about the importance of equality at an interfaith meeting, but what does that mean when the meeting is adjourned and we go back to our lives without challenging the glaring privileges that exist for those of certain beliefs, and the disadvantages that exist for others? That is one reason why I believe interfaith advocates should also be passionate advocates for secularism.

Sadly, interfaith initiatives in the UK have not always supported the principles of equality and freedom of belief. At times, interfaith policies have been downright discriminatory. In 2012 the country's leading interfaith organisation, Inter Faith Network for the UK, refused to grant membership to the Druid Network, the first Pagan organisation to be recognised as a religion by the Charity Commission.

The reason for this exclusion? It was apparently "to avoid causing offence" to the other faiths in the network. IFN believed that to allow the Druid Network to join would damage the charity's work to the extent that it could no longer carry out its charitable aim of "promoting religious harmony among faith communities in Britain".

Far from promoting religious harmony, in excluding the Druid Network, IFN contributed towards religious privilege and inequality. It showed prejudice and mistrust towards a particular religion. And it put the perceived fear of causing offence to one group over the basic right of another to participate without discrimination. Such actions would be unthinkable within a secularist framework.

Thankfully, the IFN has begun to open up a little more, and the Druid Network was finally accepted into IFN in 2016. But IFN continues to exclude other groups. According to IFN's membership criteria, they "warmly welcome" applications from bodies who "share a commitment to the development of inter faith understanding and co-operation and to working together for this." However, the only groups who are eligible to join are faith groups, interfaith groups, and educational/academic bodies with a focus on interfaith issues. This means that even though they may demonstrably share IFN's goals of promoting interfaith understanding and cooperation, non-faith groups such as humanists, atheists, and human rights groups without a particular faith ethos cannot join.

We cannot hope to promote true interfaith understanding without the inclusion of everyone who supports the goals of interfaith – and that includes those who have no faith, and members of new, minority religions. And as the UK becomes increasingly diverse and irreligious, the need to open up interfaith to a wider variety of views grows ever more important.

To me, it is clear that a simple way to keep interfaith relevant and effective in its goals would be to put secularist principles at its very heart. Equality of people of all beliefs and none in the eyes of the state? Freedom of belief, non-belief or to change belief? Freedom of expression for people of all faiths and none? Universal human rights that apply to all, regardless of religious considerations? These are all goals that I would say most people involved in interfaith would support. It is only in countries that reject secularism, such as theocracies where one has no choice but to follow the state religion, or countries where all religions are forbidden, that interfaith dialogue is impossible. Conversely, a secular system enables interfaith dialogue to take place without impediment from the state, and without the voice of one group dominating over another.

If interfaith initiatives continue along a path of excluding voices, or treating some voices as more worthy than others, they will lose all sense of purpose. That's why I believe it is crucial that interfaith looks to the guiding principles of secularism in order to become a positive and inclusive movement where everyone who believes in social cohesion, tolerance and peaceful coexistence is welcomed.