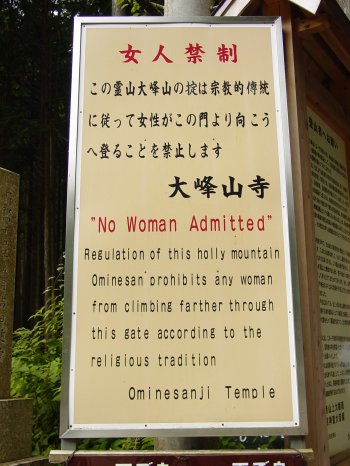 UNESCO says gender equality is one of its top priorities. But Megan Manson says it is protecting misogynistic attitudes by awarding World Heritage Status to religious sites that practise sexual discrimination.

As the UK's United Nations Universal Periodic Review revealed, the United Nations is keen to talk about women's rights. Recommendations to the UK in the UPR included exerting more effort to combat violence against women and girls (including combatting FGM), and to take measures to provide adequate reproductive healthcare services – both causes that the NSS has long supported.

This talk of women's rights can be found throughout the UN's various agencies, including the United Nations Educational, Scientific and Cultural Organization (UNESCO). On its introduction page, UNESCO lists "gender equality" as one of its two global priorities, and this issue even has its own dedicated page on the UNESCO website. The opening lines of this page state, "UNESCO considers gender equality as a fundamental human right, a building block for social justice and an economic necessity. It is a critical factor for the achievement of all internationally agreed development goals as well as a goal in and of itself."

If that is the case, why is UNESCO awarding World Heritage Status, a prestigious certification that the site is considered to be of "outstanding value to humanity," to religious sites that exclude women?

One of these is Mount Athos in Greece, a complex of Eastern Orthodox monasteries. Mount Athos has a strict ban on women to apparently make living in celibacy easier for men who have chosen to do so. The female sex so terrifies the monks that even female animals are banned (apart from female cats, insects and songbirds, which are acceptable for some reason). In 2003 the European Parliament adopted a resolution stating that the ban runs counter to the equality of gender and people's right to move freely in the EU, but priests rejected these claims on the grounds that the government granted the area autonomy in 1926.

Another is Mount Omine in Japan, the site of the holiest temple in the Shugendo religious tradition. There is a sign at the entrance to the mountain path, written in Japanese and English, telling women that they are prohibited "according to religious tradition". The reasons given for this are to do with keeping the male Shugendo pilgrims away from 'distractions,' or to prevent the female mountain deities from getting jealous of the women, or a taboo on menstruation as it makes women "unclean".

The only purpose that the ban on women in these places serves is to re-enforce the privileged status of men within religion, and the degrading and misogynistic notion that women are, somehow, inherently 'dirty'.

Needless to say, there are plenty of women who are not very happy about being banned from places of great spiritual and cultural significance. At Mount Omine there have been multiple challenges to the ban on women, and every year female activists (and on occasion a male activist who dresses as a woman) breach the ban and climb the mountain, to the condemnation of the local authorities.

Yet despite the efforts of women who are crying out for fairer treatment, UNESCO continues unabated to award its World Heritage Status to religious sites that discriminate on the basis of gender. In July this year, another Japanese site that bans women, Okinoshima, was added to the World Heritage list. A sacred island according to the Shinto tradition, Okinoshima has historically been off-limits to all but male priests from the associated Munakata Taisha shrine complex on the mainland, and an annual pilgrimage of 200 men each year. Once again, the issue of women's "impurity" due to menstruation is given as a reason for the ban.

It should be noted that the since receiving its World Heritage Status, the Munakata Taisha authorities have decided to restrict entry to the island even further, and will prohibit entry to all but their priests from 2018. An exemption will be granted for academics, who will be allowed to enter the island for research and preservation purposes. It's unclear whether this exemption would include female academics. Indeed, one wonders whether the possibility that female academics might exist had ever crossed the minds of the authorities.

To gender equality campaigners, awarding a sexist site World Heritage Status adds insult to injury. For an organisation that says it considers gender equality a "fundamental human right" to then certify a site that discriminates against 50% of the human race as being of "outstanding value to humanity" undermines the work of those who are trying to bring about true gender equality. And to rub even more salt in the wound, women see their taxes going to fund the preservation of these sites – sites that they can never enter.

UNESCO is aware of this contradiction in its mission aims, and even tries to explain them away. Its January 2016 edition of World Heritage magazine was devoted to the theme of gender equality, and acknowledged the fact that "gender imbalance emerged as a possible bias" within certain aspects of the nomination evaluation process of World Heritage candidates.

But on further reading of this edition of World Heritage, it's clear that, like so many publically-funded institutions, UNESCO has fallen under the spell of religious privilege.

Take its gushing focus piece entitled 'Mount Athos – More than just a man's world', written by male researcher Thymio Papayannis. It describes the concept of avaton (i.e. the rules which include the prohibition of women) as "…an inalienable part of the living spiritual tradition of Mount Athos that deserves to be respected and protected." A cynic might re-state this as 'a quaint folk relic of a time long gone that needs to be kept for the benefit of academics who study such things.'

Later, in the focus piece on Mount Omine, author Edwin Bernbaum (another male academic) reflects on the fact that when he went on the pilgrimage to the mountain range, he and his wife had to part ways – he proceeded up Mount Omine, while his wife climbed the nearby Mount Inamura, which is often referred to as the 'Women's Omine'. Bernbaum notes that Mount Inamura "…has a more pointed and elegant summit than the men's mountain," perhaps in an effort to prove that segregation is not discrimination and that the women are really quite lucky to be given a supposedly more beautiful mountain to climb.

What he fails to mention is that, unlike Mount Omine, there is no sign at the foot of Mount Inamura telling men to keep out, and men also climb this mountain. Moreover, as University of California's Lindsey DeWitt points out in her research, unlike Omine, Inamura is not really taken seriously as a place of spiritual pilgrimage:

"Inamuragatake [Mount Inamura] certainly provides an alternative to [Mount Omine] that women (and men) actively pursue, but in my view the religious dimension of "Women's Omine" is often exaggerated. It is difficult to reconcile the image of 'Women's Omine' (a religious training site for women) with the present-day reality of Inamuragatake (a popular day hike enjoyed by both men and women that does not feature worship facilities or implements)."

Far from being a 'Women's Omine', Mount Inamura simply reveals an attempt to silence voices of dissent against discrimination.

I believe that if UNESCO is truly sincere in its statement that it considers gender equality a fundamental human right, it should stop awarding its World Heritage Status to places that actively prohibit people from participating in them on the basis of their gender. Gender equality should not be relegated to specific activities of UNESCO, but should permeate throughout its entire operation. That includes the evaluation criteria for World Heritage sites.

UNESCO's continued treatment of religious sites that ban women as worthy of special recognition not only sanctions the continued sexual discrimination within those sites themselves, but also gives the green light to misogyny on a broader scale. It is a message that sexual discrimination is permissible within religion and that the practice of treating women as second-class citizens should not only be accepted, but even protected.

If UNESCO were to withhold its World Heritage Status from sites that practise gender discrimination, it would send a clear signal that it is committed to its goal of promoting gender equality and, what's more, it may encourage some of these religious institutions, and their surrounding societies, to become more inclusive of women.

The NSS has written to UNESCO to express our concerns on this issue.